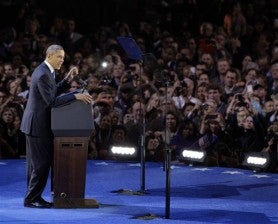 Shortly after he took office in January 2009, Obama declared that he would shutter the prison camp for “war on terror” suspects within a year, saying it served as a recruiting tool for militant and hurt US national security.

But Obama’s vow has foundered amid deep opposition from lawmakers and other key politicians to moving inmates to the US mainland or holding civil trials for key Al-Qaeda suspects, as well as reluctance from allies to house them.

Rights groups have strongly criticized the president for his Guantanamo failures and for maintaining other stringent security tactics put into practice under his predecessor George W. Bush.

Now “is a time to once again be a nation where we can be both safe and free,” American Civil Liberties Union (ACLU) executive director Anthony Romero said in a statement.

“We urge President Obama to dismantle a national security state where warrantless surveillance, extrajudicial killings of American citizens by drones and other attacks on our personal freedoms have been deemed acceptable.”

She called for a “reset” on human rights.

Rights groups have denounced legislation enacted to authorize indefinite detention without charge, warrantless surveillance and the use of military force against Al-Qaeda.

The groups also protested the ending, without any charges, of a probe into the deaths of two detainees subjected to harsh interrogation tactics in secret CIA prisons abroad after September 11.

The ACLU has taken the government to court over its refusal to reveal the legal basis of its use of predator drones to conduct so-called “targeted killings” in other countries.

The “last thing” senior Obama officials expected when they took office nearly four years ago was to face accusations of extrajudicial killings, murder and war crimes much like their Bush-era predecessors, said John Bellinger, who served as State Department legal adviser under Bush.

He has warned that unless the Obama administration does a better job explaining the legal and policy basis for its unmanned drone strikes on terror suspects abroad, it risks “having its largely successful drone program become as internationally maligned as Guantanamo.”

“All of this places the Obama administration in a similar position to the Bush administration after its first term — a growing international unease toward aggressive US counterterrorism policies,” Bellinger wrote in the online journal “Lawfare.”

Writing in The Washington Post, Baher Azmy of the Center for Constitutional Rights stressed that “torture was President Bush’s legacy at Guantanamo.”

“I hope that President Obama’s legacy will not be that he legitimized indefinite detention without charge and made Guantanamo a place where the United States sends Muslim detainees to grow old and die,” he added.

The US naval base at Guantanamo Bay in southern Cuba accepted its first prisoners from the newly drawn battlefields of the global “war on terror” on January 11, 2002.

Several key planners of the September 11 attacks in 2001 are among 166 prisoners still at the camp. Of those, only six — accused USS Cole bombing mastermind Abd al-Rahim al-Nashiri and the five 9/11 co-defendants — face any formal charges.

More than 40 of the detainees have been deemed releasable, yet remain in the prison due to political and logistical challenges to house them elsewhere.

“President Obama has now a second opportunity to get it right, to follow through on the admirable goal that he set up for himself,” ACLU’s national security director Hina Shamsi told AFP.

Nossel of Amnesty urged Obama to act quickly or risk allowing the detainees to “die there of old age decades from now.”

“No future president is likely to renew Obama’s ill-fated pledge to close the facility,” she said.

Many analysts were skeptical Obama would follow through on closing the detention camp in his second term.

“The debate today over Guantanamo’s future is between a vestigial and by-now-empty promise and open acceptance of the status quo,” Benjamin Wittes of The Brookings Institution think-tank wrote in Lawfare.

Guantanamo is no longer a “major issue: they can live with this,” historian Karen Greenberg said in an interview. “I don’t think they will go forward.”