4 hurt as bus falls off Skyway 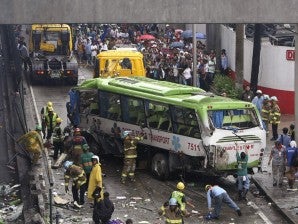 SKYWAY MISHAP. Rescuers work on the wreckage of a passenger bus after it fell off an elevated highway and plunged more than 30 feet below on a rainy Tuesday in Parañaque City. Two people were killed from the seven people on board. AP

A Dimple Star Transport bus with body number 7511 was travelling northwards at around 11:10 a.m. when it fell forty feet from the Skyway and landed in front of the Schenker Company in Paranaque City, said Superintendent Edwin Butacan, Highway Patrol Group spokesman, and Inspector Jenny Tecson, Southern Police District spokeswoman.

Four were injured during the accident, said Tecson. They were rushed to the Paranaque Medical Center, she said.

Tecson said their men had rushed to the area after receiving information about the accident. HPG director Chief Superintendent Leonardo Espina said he also sent four of his men.

Tecson could not provide other details as of posting time.