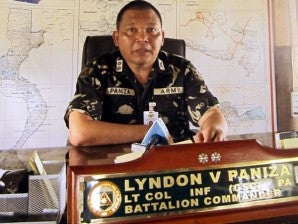 Lt. Col. Lyndon Paniza, the division’s spokesperson, said they have asked the Philippine Army’s top brass to convene the court-martial to dispel suspicions of a whitewash.

“We would like the truth to come out, so we requested the higher headquarters to create the court-martial and hear their case to avoid (perceptions of) bias,” Paniza told the Philippine Daily Inquirer by phone.

Last week, the Board of Inquiry formed by the 10th Infantry Division said it found probable cause to charge the soldiers with violations of the Articles of War in a court-martial for the deaths of Juvy Capion and her sons, Pop, 13 and John, 8, during a military operation in Barangay Kimlawis in Kiblawan, Davao del Sur, on Oct. 18.

While maintaining that the deaths of Capion’s wife and sons stemmed from a legitimate encounter, the BOI said Jimenez and his men committed tactical lapses.

While 27th Infantry Battalion commander Lt. Col. Alexis Bravo was not included on the list of those to be charged, Paniza said in a separate e-mail to the Inquirer that Bravo has resigned his post “to allow other third-party groups to investigate freely and to prove that there is no cover-up in the search for truth in this incident.”

Bravo’s action was “laudable and an example of a true gentleman and a courageous leader who is willing to accept the consequences of his action and of his subordinates,” Paniza said.