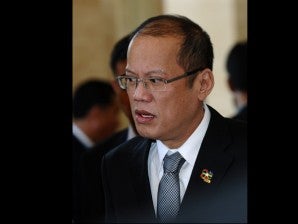 President Benigno Aquino walks out during a break while attending the ninth Asia-Europe (ASEM 9) summit in Vientiane on November 6, 2012. AFP

AM VIENTIANE, Laos—It wasn’t just in front of a Filipino audience in Vientiane that President Benigno Aquino III had harsh words about the administration of his predecessor, former President Gloria Macapagal-Arroyo.

The President managed to get in a single, biting sentence about the previous administration when he spoke before Asian and European leaders at the 9th Asia Europe Meeting (ASEM) here and called for stronger partnership on economic matters between the two continents.

On the first day of the two-day affair on Monday, Mr. Aquino spoke at the summit’s first session on economic and financial issues, and outlined what said were the lessons his administration learned as it worked for inclusive growth.

But, he said, before his administration took over, the Philippines was poorly run.

“We suffered during the Asian financial crisis followed by nine-and-a-half years of misgovernance,” he told the world leaders.

In turn, he said his administration pursued a simple strategy, that of good governance, which he said means good economics.

Mr. Aquino, on the day of his arrival in Laos on Sunday, also delivered several broadsides against his predecessor when he spoke of the faults of his predecessor during his meeting with members of the Filipino community. A few weeks before, he also criticized Arroyo when he met with Filipinos in New Zealand.

Critics of the President have blasted him for his frequent tirades against the Arroyo administration during his public speeches.

A copy of the President’s speech at the ASEM was e-mailed to reporters by his staff, since the ASEM session was off limits to media.

In his speech, Mr. Aquino also pushed for a dynamic global economy where, inter- and intra-regional trade and investments would flourish. Asia and Europe would both benefit from stronger economic relations, he said.

“Asia needs Europe to realize its projected future of broad-based prosperity, just as Europe needs Asia to hasten its long-term economic recovery. A reinforced Asia-Europe economic partnership, founded on the principles of equality and mutual respect, is therefore imperative,” he said.

On the matter of the Philippines, Mr. Aquino said his vision was to combat wastefulness in order to help improve people’s lives, and one example of this was his administration’s zero-based budgeting process under which agencies have to justify every item in their budgets.

He also boasted of his administration’s expansion of the conditional cash transfer program for the impoverished, an undertaking that was actually begun by the Arroyo administration.

The Aquino administration has increased the number of recipients of the monthly cash assistance to 3.1 million households this year, and the intent is to give the poorest of the poor families a lifeline on the condition that they send children to school and send pregnant women for regular checkups.

Mr. Aquino also said his administration has increased the number of Filipinos with medical insurance as well as improved the quality of its coverage.

According to him, his “efficient and inclusive approach to governance” has reaped economic gains.

He noted that the GDP grew by at least 6.1 percent in the first semester of the year, exceeding the forecast of five to six percent. The 2012 report of Knight Frank and Citi Private Bank  projected the Philippine economy to be the sixth fastest growing economy in the world for the period between 2010 and 2050.

“By staying true to the spirit of honesty, transparency, and inclusiveness, the Philippines has not merely weathered the economic storm, we have navigated into calm waters. We have reclaimed the confidence of our people and of the international community,” he said.

Read Next
Obama wins California, Washington, Hawaii; Romney wins Idaho
EDITORS' PICK
vivo’s coming to town to grant wishes with more holiday promos
Is it safe to talk politics again at family gatherings? ‘The Reconciliation Dinner’ shows us what that’s like
The Best Tech Gifts For The 2022 Holidays
House energy committee chair Arroyo bats for cheap electricity
Pagasa: Warm, sunny Sunday in most parts of PH
EDITORIAL: To a bike-friendly future
MOST READ
LOOK: Vhong Navarro transferred to BJMP detention facility in Taguig
The Elephant Man in the Senate
Posh village as ‘shabu’ haven
LOOK: Zanjoe Marudo bonds with Ria Atayde, her family
Don't miss out on the latest news and information.