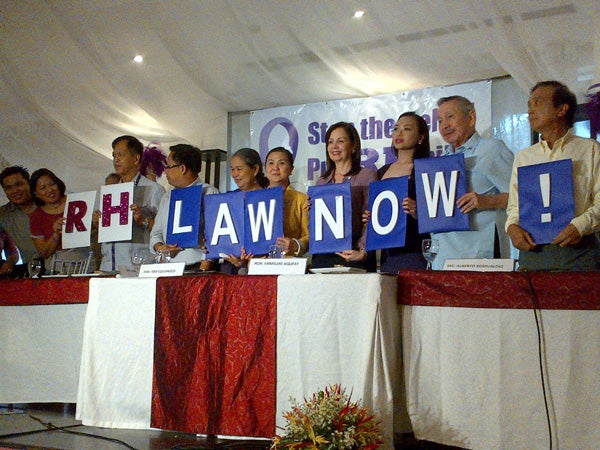 MANILA, Philippines — Civil society organizations and lawmakers banded together on Wednesday, urging that the revised version of the controversial Reproductive Health Bill be put to a vote at the House of Representatives.

In a press conference, CSOs Likhaan Center for Women’s Health Inc. and Midwife E Philippines joined female lawmakers from the Philippine Legislators’ Committee on Population and Development Foundation Inc. in pushing for the recently introduced version of House Bill 4244 otherwise known as the RH Bill.

Female legislators who have banded together as “Soul Sisters” at the lower chamber of the 15th Congress – Pangasinan Representative Kimi Cojuangco, Representative Bernadette Herrera-Dy, and Diwa Partylist Representative Emmeline Aglipay – urged fellow lawmakers to halt delays to the RH Bill’s developments and put it to a vote.

“The problem is that we’ve never been able to enter the amendments period proper for the RH Bill,” said Cojuangco.

“The House leadership has bent over backwards to urge the antis to look at our bill, we’ve exhausted everything and it’s time to put it to a vote,” she urged.

The Pangasinan lawmaker described how Speaker Feliciano Belmonte Jr. spoke to each of the legislators opposing the RH Bill. “He decided to do some backchanneling with the antis but it didn’t work. So it’s time to fight it out in the floor.”

“We’ve always maintained a very flexible stance to come up with conditions palatable to them. We want to compromise and hope to work together and cooperate in discussing these amendments,” added Aglipay.

Herrera-Dy urged fellow lawmakers to “be present during session whether you are for or against the RH Bill.”

The lower chamber of the 15th Congress has faced difficulties in maintaining quorum with regards to deliberations on RH Bill but Cojuangco assured that there was basis for their seeming confident during session. She said that it was part of their strategy to not disclose the number of legislators on their side for now.

“I know the numbers,” Cojuangco assured, issuing a challenge to Rodriguez to put the RH Bill to a vote to see where it stood.

“The RH Bill is one more phase in the movement towards universal health care. It will strengthen the efforts of the government to close the gender gap in health care,” he said.

Romualdez pointed out how this version of the bill has “removed the anxieties people have expressed” and called for support for the proposed measure.

Professor Ernesto Pernia from the University of the Philippines School of Economics explained how the RH Bill would not only be an improvement in the country’s health services but would also have an impact to the country’s economy by empowering women.

“This will translate to economic benefits in the sense that women can participate in labor force,” he said, adding that having the choice in how many children they are capable of supporting is vital to empowering women.

To Dr. Junice Melgar of Likhaan Center for Women’s Health, the RH Bill will bring “immeasurable benefits to women”, many of whom have fallen ill and have died due to the lack of access to reproductive health care.

The RH Bill has been pending in Congress for eleven years.

The new version of the bill prioritizes the provision of free reproductive health care, services and supplies needed by women and men in marginalized households as determined by the National Household Targeting System for Poverty Reduction (NHTS-PR).

It also supports the distribution of “medically safe, legal, ethical, affordable, effective and quality reproductive health care services, methods, devices and supplies which do not prevent implantation of a fertilized ovum as determined by the Food and Drug Administration (FDA).”

The State will promote “openness to life” under the said version of the RH Bill given that parents bring forth and raise a number of children which they can support “in a truly humane way.”