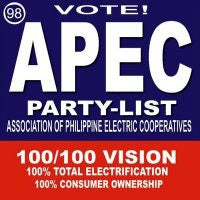 MANILA, Philippines—Party-list group Association of Philippine Electric Cooperative (Apec) on Tuesday questioned before the Supreme Court the Commission on Elections (Comelec) decision disqualifying them from running in next year’s elections.

In its 88-page petition for certiorari, Apec is also asking the high court to issue a temporary restraining order from implementing its decision that disqualifies them from running in the elections and to issue a status quo ante order directing the Comelec to include them in the list of party list candidates.

“It is most respectfully prayed of this most Honorable Court that a status quo ante order be issued so as to enable APEC as a party list to revert back to its former status and standing before the issuance of the assailed resolution of the Comelec and directing the Comelec to include APEC in the final list of candidates under the party list system for the 2013 national elections to be voted upon as party-list organization…,” the petition stated.

Apec is the second party list group disqualified by Comelec that took its case to the Supreme Court. Last Oct. 30, Ako Bicol (AKB) Party, through its lawyer retired Supreme Court Associate Justice Vicente Mendoza told the high court that the Comelec acted beyond its power in determining the qualification of a party-list group.

In Apec’s petition, like Ako Bicol, they also said Comelec violated their right to due process.

Apec’s legal counsel Yeshter Donn Baccayy said the Comelec, in determining the continuing compliance of every party-list group to Republic Act 7941 or the Party-list law, it converted it to a disqualification case without even getting their side. He said there is no petition asking for their disqualification.

Baccay said Apec is a 5-term party-list group. It has been sitting in Congress since 1998.

“That’s why it hurts when we are dropped from the race,” Baccay said.

Apec and AKB are among those disqualified party-list groups announced by Comelec.