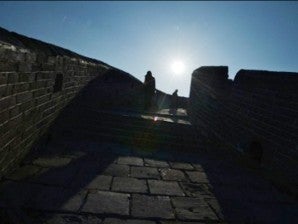 This photo taken on October 20 shows hikers on a section of the Great Wall of China at Jinshanling, Hebei Province. AFP FILE PHOTO

BEIJING – Two elderly Japanese tourists died and another was missing after being trapped in sudden, heavy snowstorms during a visit to the Great Wall of China, state media reported Monday.

Two women, aged 62 and 68, were confirmed dead, and a 76-year-old Japanese man remained missing on a snow-covered mountain near the wall in China’s northern Hebei Province, according to a local government statement cited by Xinhua news agency.

Another Japanese tourist and a Chinese man who works for a Japanese tour agency, were receiving medical treatment at a local clinic, Xinhua added.

The group started to climb the mountain from the Beijing side as part of a tour of the Great Wall on Saturday morning.

They were trapped overnight on Saturday after reaching a mountainous region in Huailai county, in the neighbouring province of Hebei, the statement said.

The bodies of the two dead tourists were found some time after 7pm on Sunday night.

Heavy snowstorms swept across northern China over the weekend, with the most extreme weather hitting Beijing, Hebei and the northern Inner Mongolia region on Saturday night.

Beijing was forced to issue its second-highest blizzard alert on Sunday after the Chinese capital was hit by an unusually early snowstorm.

In the 24 hours until Sunday morning the city saw 5.8 centimetres (2.3 inches) of precipitation— rain and snow combined – the highest daily total for any cold season since 1951, the Xinhua news agency said.

Hundreds of cars were stuck in the snow across China’s capital city over the weekend.