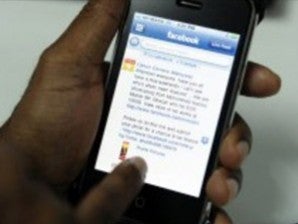 KUALA LUMPUR – Police have arrested a 27-year-old quantity surveyor for allegedly posting seditious remarks on Facebook about the royal family of a southern Malaysian state, his brother said Sunday.

Ahmad Abd Jalil was arrested in Kuala Lumpur on Friday night but handed to police in Johor where he may have to beg forgiveness from the sultan, his brother said.

The government has announced plans to repeal the controversial Sedition Act, which has previously been justified as necessary to curb racial conflict in the multicultural nation.

But authorities have continued to invoke the act, under which those found guilty can be jailed, and Ahmad’s arrest is at least the third in two years related to the Johor royal house.

“They said the sultan was angry over Facebook posts and that it was being investigated under the Sedition Act. But they could not tell us which posts were being investigated,” said Ahmad’s brother, who asked not to be named.

Ahmad’s lawyer, Fadiah Nadwa Fikri, told AFP he had not been allowed to meet any family members or lawyers since being brought to Johor.

“The alleged crime happened here so there is no reason to take him to Johor. They should just take his statement and let him go, this is not a violent crime,” she said.

“Police told the family they may take Ahmad to the palace to beg the Sultan’s pardon and then they can drop the case but that is highly unconstitutional.”

Police refused to confirm details of the arrest.

“I cannot comment on this as it is extremely sensitive,” Johor Baru (North) district police chief Ruslan Hassan told AFP, referring to the state’s royal house.

Each state’s royal family is given limited powers in the federation of Malaysia. They are widely revered by the majority Malay Muslim population as the rulers are heads of Islam in their respective areas.