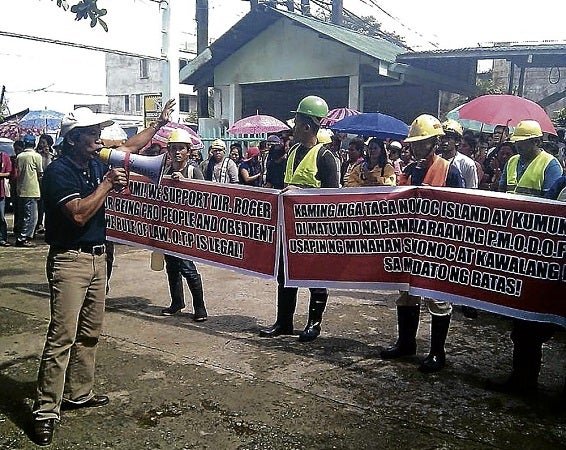 NONOC ISLAND, Surigao City—The island is red and almost barren, the sea encircling it not as generous as it was once due to overfishing and pervasive use of illegal fishing methods.

People of Nonoc Island in Surigao City, literally living on top of what is touted as one of the biggest nickel and cobalt deposits in Southeast Asia, have become efficient miners instead.

They refer to the period from 1975 to 1982 as the “golden era” of the Nonoc nickel mines, when the whole concession employed thousands and created offshoot industries.

“It was a city of its own. People from all places went to Nonoc to try their luck, and many found it here,” said barangay captain Eleuterio Rendon, 65.

That luck soon ran out, as surging fuel prices and falling nickel prices in the world market forced Marinduque Mining into bankruptcy.

“Bakeries, restaurants, grocery stores and all thriving businesses that catered to thousands of mine workers immediately closed shop. It was as if everybody left the island in the wink of an eye,” said Juvy Lisondra, 56, who tended her own eatery during Nonoc’s heydays.

For fishermen who must go back to their old livelihood, the transition was particularly difficult.

Dozens of neighboring islands have no mountains of nickel deposits to boost of, and their inhabitants rely primarily on fishing to put food on the table. The already stiff competition for marine resources is aggravated by inclement weather—common to the Surigao provinces—and illegal fishing methods, such as the use of dynamite and liba-liba (Danish seine fishing).

“The fishing industry is dead in these parts. A fishermen catch for a night’s toil is only enough for his family’s consumption; sometimes, fish is so scarce it’s only enough for him,” said Rosalindo Lucena, 61, a fisherman who had worked in the nickel mines during his youth.

“When we wake up every morning, we see the mountains of nickel around us,” Lucena said with a tone of grief. “But it’s something we are forbidden to touch and we came to a point when we considered the red soil a curse.”

He was referring to the series of ownership wrangling and legal battles that dimmed the prospects of fully reopening the Nonoc mines.

The area was foreclosed by the Philippine National Bank and the Development Bank of the Philippines in 1984. The two banks then created Nonoc Mining and Industrial Corp. (NMIC) and ceded the area to the company to protect the assets from deteriorating while waiting for investors and for the market situation to improve.

In 1995, Philnico Industrial Corp. (Philnico) bought the assets from the government. It also agreed to settle some $300 million in debts it inherited from Marinduque Mining.

A mineral production sharing agreement covering 25,000 hectares of land in Nonoc and portions of Awasan Island was granted the following year. But over a decade later, Philnico has not been able to restore full mining operations. Short of cash and hobbled by its intermittent clashes with government agencies, it has yet to put up its high-pressure acid leach plant.

A contractor for Philnico’s subsidiary, Pacific Nickel Philippines Inc., currently employs 1,444 islanders to work on a 1,400-hectare mine—a figure that locals and industry stakeholders say is a far cry from the actual workforce needed to operate the whole 25,000-ha concession.

The people, however, have seen these jobs come and go as Philnico continues to engage government agencies over a range of issues, such as its alleged failure to settle the full amount when it purchased the government’s stake in NMIC.

According to the Department of Finance (DOF), Pacific Nickel still owes the Privatization and Management Office some $263.8 million, which the company disputes. A Makati court is still hearing the case of whether Philnico still has remaining obligations.

The DOF has also accused Pacific Nickel of depleting the ore deposits in the area, estimated by the Mines and Geosciences Bureau (MGB) at 1.44 million metric tons.

In May last year, Pacific Nickel and its contractor, Shuley Mine Inc., were ordered by the Department of Environment and Natural Resources to stop operating, largely on account of the DOF’s allegations. Rendon, the village chair, said his constituents were forced to either seek mining jobs elsewhere or, begrudgingly, go back to fishing.

Two months later, Pacific Nickel secured an injunction from a regional trial court to stop MGB from enforcing the cease-and-desist order in Nonoc. Judge Victor A. Canoy of RTC Branch 29 said the company was able to “substantially establish that it has a clear and unmistakable right to conduct mining operations.”

The court pointed out that the suspension order was made without prior notice and investigation.

“We were very euphoric with the court’s ruling, and we thought that finally, we can get our jobs back,” Rendon said.

The joy was short-lived. The MGB refused to issue an ore transport permit (OTP) to Shuley Mine despite a separate injunction, this time issued by RTC Branch 30, which ordered the MGB to issue the corresponding OTP.

The bureau’s defiance lasted 14 months, even after a petition by Shuley Mine to have the then acting MGB-Caraga director, Alilo Ensomo, cited for contempt of court for brushing aside its order.

The tide began to turn for Pacific Nickel and its workers after the new MGB regional chief, Roger de Dios, issued Shuley Mine the OTP early this month, signaling that it can operate again. Two more OTPs were issued last week.

Johnny Ligad, 44, is tired of the legal fights hounding the Nonoc mines and hopes that the government and Philnico “settle this once and for all and leave us to work peacefully.”

Finding work in neighboring mining towns, such as Claver, home to some of the largest nickel mines in Surigao del Norte, remains difficult, Ligad said, because companies tend to prioritize locals in hiring. He likened the possibility of going back to fishing as “finding needles in the bottom of the ocean.”

Last week, hundreds of Nonoc residents and mine workers went to the MGB office in Surigao and called on President Aquino to intervene and settle the remaining legal questions impeding full mining operations.

One of their streamers read: “Let nickel be a blessing, not a curse.”