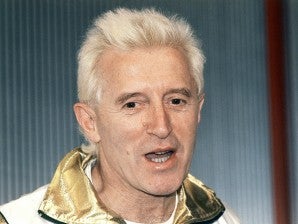 LONDON—Internet speculation was circulating Saturday after a BBC news program embroiled in the Jimmy Savile sex abuse scandal aired a report in which two men claimed they had been abused by a top politician.

The report on Newsnight did not name the man but said he was a leading Conservative politician from Margaret Thatcher’s time as prime minister, from 1979 to 1990.

The claims centered around abuse at children’s homes in north Wales, which was the subject of an inquiry in 2000.

Steve Meesham, who claimed he was repeatedly attacked during his time in care, was asked how many times he was abused by the politician.

“Off my head I wouldn’t give an exact number because obviously I’m going back many years but certainly more than a dozen,” he told Newsnight.

“Cars would pull up outside the home and you were taken.”

It was alleged that the abuse took place in the late 1970s.

Another alleged victim, who was not named, did not appear on camera and whose words were spoken by an actor, said that he was abused by the same politician, who took him out in his car and a sex act took place.

The politician was described as a shadowy figure of high public standing but the Newsnight report said there was simply not enough to go on “to name names”.

The unidentified politician told The Daily Telegraph newspaper that the allegations were “totally untrue” and he had threatened legal action if his name appeared in the story.

“I’ve never been to this children’s home.”

The BBC has been plunged into crisis over allegations that the late Savile, one of its top presenters from the 1960s to the 1980s, abused hundreds of youngsters, with Scotland Yard considering him one of Britain’s most prolific sex offenders.

An independent review is taking place at the BBC into the decision last December to drop a Newsnight item on Savile containing allegations of abuse.

The review will look at whether there were any management failings surrounding the decision to axe the probe.

The alleged victim has given a statement to the police.

“The BBC cannot comment on individual cases. It will help the police in any way it can in the course of any investigation,” a spokesman for the corporation said.

Savile, who died last year aged 84, has been accused of abusing around 300 victims over a 40-year period at a number of institutions, including the BBC and three hospitals.

The scandal has snowballed since claims that Savile molested underage girls were broadcast in an ITV television documentary screened last month that picked up on Newsnight’s dropped investigations.

The revelations have triggered turmoil at the BBC.

Jonathan Dimbleby, one of Britain’s most respected broadcasters, told The Times newspaper: “It’s disgracefully and horribly out of proportion to hound everyone at the BBC in a way that is unwarranted and lacks perspective when the real focus should be on what Savile did wrong.

“This has become a witchhunt against the BBC.

“Was there a lot more groping in the BBC in the 70s and 80s? I expect there was in every institution: men putting their arm around a woman, patting their bottom.

“It happened in schools, universities, hospitals, the media, it was inappropriate and disgusting but it is separate from paedophilia.

“We have become a ranting and anxious people who feel the nation is being terrorized by paedophiles.”

Comedian Freddie Starr was bailed Friday to return in December by detectives from Operation Yewtree, which is investigating the allegations surrounding Savile.

The 69-year-old was the second person arrested in the investigation after 1970s glam rocker Gary Glitter was held and then bailed on Sunday.

Read Next
As Mexicans mark Day of the Dead, some no longer believe
EDITORS' PICK
Unleash the photographer in you this World Photography Day with vivo smartphones
What to watch out for when selecting a video surveillance solution
Look Through: The fate of impounded stray dogs
House energy committee chair Arroyo bats for cheap electricity
Palace warns sugar hoarders after raid on Pampanga warehouse
Metro Manila’s COVID-19 cases on downward trend, but surge not over — OCTA
MOST READ
LOOK: Miel Pangilinan dazzles in glittery pre-debut shoot
Remains of two children found in suitcases auctioned in New Zealand
Palace warns sugar hoarders after raid on Pampanga warehouse
Alice Dixson to critics of her yellow gown at GMA Gala: ‘’Wag masyadong judgmental’
Don't miss out on the latest news and information.