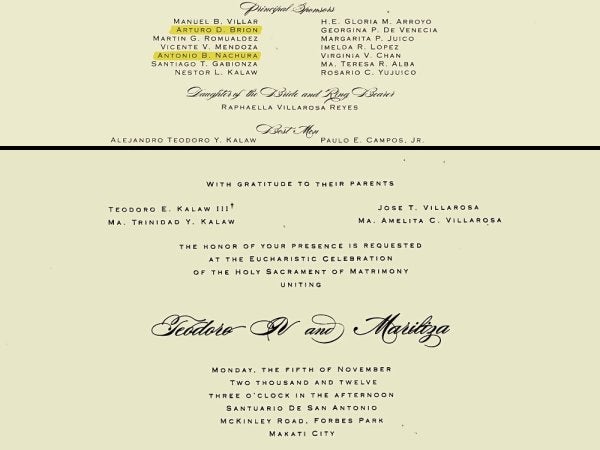 DEFINE DELICADEZA. A wedding invitation lists Justice Arturo Brion and retired Justice Antonio Nachura as sponsors at the wedding of the daughter of Jose Villarosa.

Whose side are these magistrates on?

The question begs to be asked as Supreme Court Associate Justice Arturo Brion and retired Justice Antonio Nachura are set to stand as principal wedding sponsors on Monday of the daughter of Jose Villarosa, whose case involving the 1997 killings of the Quintos brothers has reached the high court.

A brother of the slain Michael and Paul Quintos expressed disgust over the development, saying justices are not supposed to mix with litigants, much less be wedding sponsors of their children.

“They are not supposed to talk to litigants or worse, socialize with them. The worst thing to do is to stand as wedding sponsors and become kumpadre with those facing lawsuits,” Robert Quintos said in a text message from Singapore.

Quintos called on Brion to resign for accepting the invitation to be a sponsor at the wedding of the Villarosas’ daughter.

“It’s not enough that Justice Brion inhibits from the case. I believe that he should resign from the court for his blatant and gross disregard for legal ethics. I think an RTC judge would be fired for doing something like that—be a wedding sponsor to a son or daughter of someone accused of murder in his or her court,” he said.

Brion is listed as a sponsor on Villarosas’ daughter’s wedding invitation.

The Inquirer tried to contact Brion through Supreme Court acting public information office chief Ma. Victoria Gleoresty Guerra but he was not available for comment.

In a text message, Guerra said the court “has appropriate rules applicable to conflicts and ethical situations which Justice Brion can apply.”

Brion is a member of high court’s second division, which is hearing the pleas filed by the Quintos family of a Court of Appeals (CA) ruling that overturned a lower court’s conviction of Villarosa and six farmers for the fatal shooting of the Quintos brothers. The division is chaired by Senior Justice Antonio Carpio.

The Quintos brothers, sons of Villarosa’s political rival Ricardo Quintos, were shot dead by a group of men while attending a friend’s birthday party in Mamburao, Occidental Mindoro, on Dec. 13, 1997.

The elder Quintos had accused Villarosa, then congressman of the province, of being the mastermind of the killings, which he said was politically motivated.

In December 2006, the Office of the Solicitor General (OSG), headed by Nachura, recommended to the CA the acquittal of Villarosa and coaccused Gelito Bautista, Ruben Balaguer and Mario Tobias on the grounds of insufficient evidence.

Nachura was appointed to the high court by then President and now Pampanga representative Gloria Macapagal-Arroyo in February 2007.

In March 2008, the CA acquitted Villarosa, ruling that the mere confession of the gunman implicating Villarosa was insufficient.

Quintos said Nachura’s key role at the wedding “puts a big question mark” on his recommendation to acquit Villarosa when he was Solicitor General.

According to Quintos, after the Quezon City Regional Trial Court convicted Villarosa for the killings in 2006, the case was appealed in the CA. After a review, the OSG, headed by Nachura, recommended to the CA the acquittal of Villarosa and three coaccused.

Quintos doubts, however, if his family can take legal action against Nachura because he is already a retired justice. Nachura is the current chair of Arellano Law Foundation, which operates the Arellano University School of Law in Manila.

Quintos said that by becoming wedding sponsors, Brion and Nachura were shown to be “closely associated” with the Villarosas, hence the “impropriety of all past and future recommendations and decisions with regard to Mr. Villarosa.”

Nachura could not be reached for comment as his office was closed for the long weekend.

Customarily, the justices to whom a case was originally raffled would continue handling it even if they are later reshuffled to another division. The original justices—or their substitutes, in case of retirements and inhibitions—would then render a decision as a “special” or “former” division.

House Senior Deputy Minority Leader Amelita Villarosa, mother of the bride-to-be, told the Inquirer by phone that she has no comment on the issue.

“I’m just preparing for my child’s wedding,” she said. “It’s a family affair. Can you give us peace?”

The Villarosas’ daughter Mariliza will wed Teodoro Kalaw IV, son of Teodoro Kalaw III and Ma. Trinidad Kalaw, at the Santuario de San Antonio in Forbes Park, Makati City, at 3 p.m. on Monday. The groom is the grandson of former Sen. Eva Estrada-Kalaw.