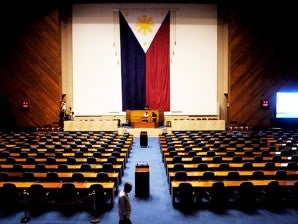 MANILA, Philippines—A move to extend the agrarian reform law by another five years upon its expiration in June 2014 is “total madness,” a militant farmers’ organization said on Friday.

Reacting to a bill filed in the House of Representatives for the extension of the Comprehensive Agrarian Reform Program (Carp), the Kilusang Magbubukid ng Pilipinas (KMP) said there was no point in giving a new lease on life to a law it described as the “milking cow” of landlords.

“This will face intense agrarian unrest and resistance in the countryside and the parliament of the streets,” KMP deputy secretary general Randall Echanis said in a statement.

“Twenty-four years of the bogus Carp failed to address the monopoly of big landlords over vast tracts of lands. Instead, the landlessness and land-grabbing suffered by farmers had worsened,” he said.

Echanis added: “Only a genuine agrarian reform program that will break the monopoly and control of big landlords over vast tracts of lands and haciendas and its subsequent free distribution to landless tillers will solve the centuries-old landlessness of peasants in the country.”

The bill filed by Representatives Rufus Rodriguez of Cagayan de Oro and his brother Maximo of Abante Mindanao seeks the extension of the Carp with reforms law, or Carper, until June 30, 2019. The law expires on June 30, 2014.

In June 1988, the government launched the Carp through Republic Act (RA) 6657 seeking a more equitable distribution of agricultural lands to farmers and farm workers. Subsequent amendments in Congress provided for its extension until 2014.

The proponents said another extension was needed for the program to fulfill its aims 24 years after Carp was implemented by President Aquino’s mother, the late President Corazon Aquino.

For example, the lawmakers said, the Department of Agrarian Reform  was still far from fulfilling its 2012 target of processing 180,000 hectares of land and has been able to process just a little over 32,000 hectares.

But the KMP is pushing for the enactment of another bill in the House of Representatives, the Genuine Agrarian Reform Bill, which seeks the “free distribution of land  to the tillers.”

Echanis said Carp was “the longest-running and most expensive agrarian reform program in the world and is not meant to address the problem of landlessness and rural poverty.”

“Carp is no less than a milking cow of big landlords. Only hacienderos like Aquino have profited immensely from it,” he said.

Aquino’s family owns the Hacienda Luisita sugar plantation in Tarlac. In 1988, when the Carp took effect, the company offered an option to own shares of stock instead of land to the farmers, sparking a long court battle.

In May the Supreme Court upheld with finality the decision of the Presidential Agrarian Reform Council in 2005 to scrap the stock distribution option and to order the distribution of 4,915 hectares of Hacienda Luisita to 6,296 farm workers.