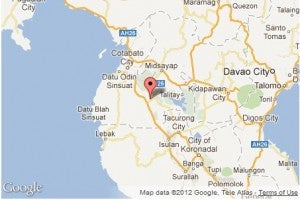 Inspector Michael Ameril, Datu Montawal police chief, said the two-year-old boy was hit by a stray bullet when the two sides fired on each other on Wednesday evening.

“He is now recuperating at the Kabacan Medical Specialist Hospital in nearby Kabacan town,” Ameril said.

He did not identify the warring parties but Col. Benjamin Hao, commander of the 7th Infantry Battalion, said one of the families was related to Datu Montawal Mayor Utto Montawal.

Hao said several families fled their homes when the fighting broke out  and they had yet to return to their villages on Friday. He said a peacekeeping force monitoring a ceasefire between government forces and Moro rebels had been sent to the town to prevent more clashes between the two parties.

“This is to separate the warring clans while efforts at peacefully resolving the conflict is being undertaken by civilian and military authorities,” Hao said.

Feuds are common in many parts of the country but they are deadliest in the five provinces of the Autonomous Region in Muslim Mindanao.

Acting ARMM Governor Mujiv Hataman said feuds can erupt into violent clashes for small things. He cited a case in Sumisip, Basilan, in where dozens were killed or wounded in fighting that escalated from a simple altercation.

Hataman said the carnage began when a man’s clothes got soiled by a passing tricycle. That man shot the driver dead. On that same day,  relatives of the slain man retaliated and killed three more persons, escalating the mayhem.

Hataman said civilian officials have been working hard to settle feuds in the provinces of Maguindanao, Lanao del Sur, Basilan, Tawi-Tawi and Sulu. While some disputes have been resolved,  many more await  resolution, he said.

ARMM Assemblywoman Samira Gutoc-Tomawis said close family ties, which contribute  to feuds can actually be harnessed to resolve the problem.

“We in ARMM have strong family ties. In the hierarchy of influences, the family is second to Almighty God. Thus, I firmly believe reform within the family can reform the society  as well,” Gutoc-Tomawis said.