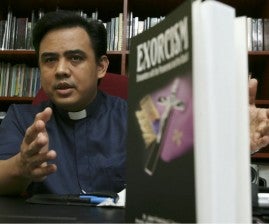 A celebrity hoards pink quartz jewelry, believing these will bring her the real love of her life.

A businessman who wants more profit puts a giant Sto. Niño statue side by side with a waving golden cat in prominent part of his store, while the head of one family consults a fortune-teller to determine an “auspicious” date to move to another house.

Filipinos who wonder why their lives remain miserable despite their religiosity should check if they still adhere to pagan things or practices, like fortune-telling and amulets, or consulting practitioners of occult arts.

In his newly released book, “Catholic Handbook of Deliverance Prayers,” Syquia warned that the devil was behind these rituals.

Recall how furious Moses was when he, coming down from Mt. Sinai carrying the two tablets on which God had written His Ten Commandments, saw his people, the Israelites, worshipping a golden calf.

“Do not bow down to any idol or worship it, because I am the Lord your God and I tolerate no rivals.” That is at the top of God’s commandments, and the Israelites who worshipped the golden calf perished and their descendants were condemned to roam the desert until they were consumed after 40 years.

Filipinos may not be worshipping pagan idols, but many of them still subscribe to practices that involve invoking the power of inanimate objects or even evil spirits.

“How many Filipinos use [amulets]?  You would be surprised. How many go to fortune-tellers? How many continue to practice pagan worship like [spilling chicken blood on the lot] before constructing a house or cutting down an old tree,” Syquia said.

In spite of advancements in civilization, even in the Philippines, “[t]he sad truth is that even after 400 years of our Catholic faith, paganism, which should have been purified, continues to exist and influence Catholics,” Syquia said.

In an earlier book, “Exorcism: Encounters with the Paranormal and the Occult,” Syquia traced pagan practices that have survived to this day to pre-Hispanic natives who worshipped idols and nature spirits.

Even after the arrival of the Spaniards, baptized natives still carried with them inanimate objects that were meant to protect them from harm.

Carried over from that period is the habit of treating Catholic sacramentals like religious medals and scapulars as charms, like rabbit’s foot, believed to bring luck.

Syquia recalled an observation made in the Second Plenary Council of the Philippines that “we are a country that is sacramentalized but not evangelized.”

Syquia said the Old Testament clearly indicated that “Yahweh distanced himself from these baals or false gods and was very strict with the Israelites because they were so easily allured and contaminated by them.”

He added that it was specifically due to the Israelites’ attachment to pagan rituals that they suffered slavery under foreign powers.

Today, the same adherence to non-Catholic rituals and practices is keeping many from receiving the grace of God.

“Most Catholics are unaware of the effects of these pagan beliefs and practices. The sad thing is that when our personal lives as well as our society as a whole fall into all kinds of difficulties, miseries, tragedies and immoralities, we would even tend to blame God for our lot,” Syquia wrote.

“When paganism and the occult contaminate the faith, the relationship with God is blocked and we can end up saying to ourselves that God is not interested in us, personally and as a nation [not knowing that] His blessings and protection… would not be able to fully enter into our lives,” he explained.

“We are not aware that the infinite love, all the blessings, and the protection of God are blocked because we are loving Him with a very divided and polluted heart,” he said.

There are practitioners of pagan dark arts that are unique to the Philippines, and Syquia listed them as follows:

Mangtatawas: An “occult practitioner” who drips molten candle wax into a basin of water and interprets the resulting form as the cause of an illness.

Manghihilot: A masseuse who use incantations to invoke the assistance of spirits to heal or relax a patient.

Mananambal: An “occultist” who uses sorcery to treat natural and “supernatural” maladies.

Manghuhula: An “occult practitioner” who specializes in fortune-telling through card-reading or palmistry.

Mangkukulam: A witch who casts spells, uses potions and dolls to cause ailments in  victims. The remedy is bribing the witch to call off the curse or finding a more powerful witch to counter the spell. But this causes the victim’s deeper involvement in the occult, as he resorts to more of it to break the spell.

Mambabarang: A sorcerer, in Cebuano, who specializes in the use of fungus beetles and other insects to cast spells on a victim.

Syquia likened resorting to occult practices to telling God that “His power and providence [are] not enough, hence we seek out other sources of power.”

There are, however, many practitioners of the occult who are not aware that their practice has evil roots, Syquia said.

“[M]any of those who continue to seek assistance and are guided by paganism/occultism as well as the many occult practitioners themselves are well-intentioned people.  They have been blinded by Satan, the great deceiver who will always try to come as an angel of light, so that our faith will remain stunted and God’s blessings blocked,” he said.

“Those trapped by the deceptions of the devil need to be awakened to the fact that they have fallen into the trap of a master deceiver,” Syquia said.

“They must be made aware that once they have opened their eyes, purified their Catholic faith and lived it out in all its purity, then and only then would they receive the fullness of the blessings, graces and protection that a child of God and a brother of Christ deserves.”

Not only is faith hindered by pagan activities, but adherence to pagan beliefs and practices affects other aspects of people’s lives.

Syquia, referring to a discussion of “split-level Christianity” by Fr. Jaime Bulatao, S.J., said: “We all know people who go regularly to Mass on Sundays and even receive Holy Communion, and yet when they go back to work, they continue to cheat, be dishonest, and steal, and this is without any qualms of conscience.”

There are also those who treat their relationship with God like a business transaction, thinking that time spent on worship is an investment that must produce a return.

“This is how our ancestors related with the anito [idols] and has been carried over even to the present with our relationship with God,” Syquia said.

And there are also those who go with the New Age Movement without knowing that it is what Pope John Paul II described as a “return to ancient Gnostic ideas.”

The Gnostics were early Christian sectarians who claimed only they had the real gnosis—knowledge—to return to God. Gnosticism was considered a “heresy in the early Church,” Syquia said.

Belief in paganistic and occult practices explains “why the devil has so much power in our society so much so that many Filipinos become victims of extraordinary demonic attacks of obsession, oppression and even possession,” Syquia said.

“This is also the reason we have many so-called haunted places, whether they be trees, rocks, rivers, mountains, forests, roads, schools, offices, condominiums, hospitals or individual houses,” Syquia said.

“Paganism is for us as it has been throughout history—the doorway [through which] the world of spirits (fallen angels) is able to enter more tangibly into our world,” he said.

Purifying the faith and working for a deeper understanding of God’s love would eventually lead a believer to His grace, Syquia said.

“God infinitely desires to bless us not only with divine peace, joy and the abundance of His graces but even [provide] for all our temporal needs, for our God is a generous God,” he said.

“If we but rely and trust in God alone by removing from our lives all [things] that are not of God, we would be surprised [to find] how infinitely loving our Father is,” he added.