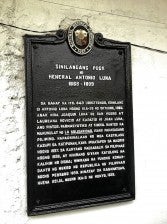 THE MARKER installed by the government on the house on Urbiztondo Street in Binondo, Manila.

A house in Binondo, Manila, believed to be the birthplace of revolutionary hero General Antonio Luna, is in a sad state.

With its galvanized iron roof slowly being eaten away by rust and its capiz windows missing a few panels, the now-empty two-story structure used to serve as a storage area for sotanghon (bean thread noodles) and old furniture.

In the hopes of seeing the house preserved and restored, the Manila city government has urged the National Historical Commission of the Philippines (NHCP) to buy the historic landmark on Urbiztondo Street.

Manila Mayor Alfredo Lim made this appeal during a wreath-laying ceremony held last week in front of the old house to commemorate Luna’s 146th birth anniversary. 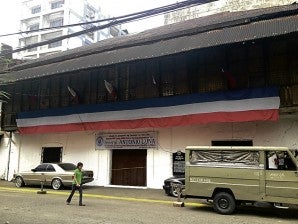 IS THIS house, which used to serve as a storage area for noodles and furniture, General Antonio Luna’s birthplace? The National Historical Commission of the Philippines says it is but its owner says otherwise. PHOTOS BY ERIKA SAULER

Born in Binondo, Manila, on Oct. 29, 1866, Luna was the brother of painter Juan Luna. He cofounded the periodical organ of the revolution, La Independencia.

According to NHCP, General Luna was the greatest Filipino strategist during the Filipino-American War. He was assassinated on June 5, 1899, in Cabanatuan, Nueva Ecija.

The Chinese businessman who owns the house has told the Inquirer that he was willing to sell it for P100 million although he was doubtful about its supposed background.

Lorenzo Tan, 66, said his family has been trying to negotiate the sale of the house to the government but they were told that there were no funds available.

He went on to say that the historical marker put up by the NHCP in 1967 was first installed at a nearby house—that of his mother-in-law—but she disapproved of it so the NHCP moved it to its current location.

“Do you think this is a house from 1866?” Tan said as he gestured toward the structure’s facade.

“We used to live in that house. As kids, we would play and run around inside. We didn’t know it was Luna’s house until the NHCP put up the marker,” Tan said. He now lives in the house next door.

The Inquirer called up NHCP Executive Director Ludovico Badoy for comment but was told that he was in a closed-door meeting.

Read Next
2 women living proof that true love, even in the face of death, is eternal
EDITORS' PICK
Harnessing technology for quality education
Connect to PH’s fastest network with new Signature Plan Lite at only P599 per month
Nesthy Petecio ‘blessed’ as Olympic gold quest continues
Tips for a cheerful life
Killing of 2 activists hours before SONA condemned
Nesthy Petecio assured of Olympics bronze, ousts Colombian foe
MOST READ
Nesthy Petecio assured of Olympics bronze, ousts Colombian foe
Isko for 2022? Manila mayor takes a swipe at Duterte on live broadcast
Why is Taiwan not called Taiwan at the Olympics?
Pagasa: More monsoon rain in NCR, Luzon; fair weather over Visayas, Mindanao
Don't miss out on the latest news and information.