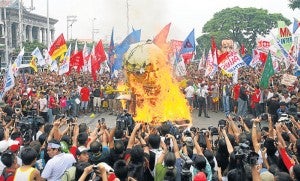 PH will elevate Spratlys spat to the United Nations.

We can’t ignore crimes of the past; we have to hold people accountable.

Special mention of Pagasa for delivering reliable advice and warnings

Compensate victims of martial law and grant our househelp salaries they deserve.

2012 budget proposal to be delivered to Congress today.

Now, you know your taxes are going where they should; no reason not to pay proper taxes.

1.7M self-employed and professional taxpayers like lawyers and doctors who pay an average of only P5,783 in income tax, which means each earned only P8,500 monthly

Confidence of investors revived in the DOE; 140 firms ready to join exploration of our oil and natural gas resources.

All DPWH projects required to having work programs have so far saved P2.5B; about P6 to P7B by year’s end.

US Secretary of State Hillary Clinton noted the “sea change’’ in the Aquino administration, which has taken off PH from the human trafficking watch list.