‘Thank you, my Bosses’ 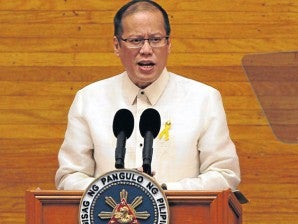 President Aquino delivers his second State of the Nation Address at the Batasang Pambansa building in Quezon City on Monday, vowing to strengthen the government’s anticorruption drive to free up more resources and punish corrupt officials. EDWIN BACASMAS

President Benigno Aquino III on Monday reaffirmed his commitment to root out the “culture of wangwang” (abuse of power) in every nook of government and in society, and said the fight against graft was personal to him and should be to all Filipinos because they were victims of corruption.

In his second State of the Nation Address (Sona) since taking office last year, the only son of late democracy icon Cory Aquino thanked the people for helping him in his crusade for change, saying it is the Filipinos treading “the straight and righteous path” who have created the change.

At the end of his speech, Mr. Aquino thanked the Filipino nation, “my Bosses.”

Zeroing in on how public funds were squandered and citing one example, Mr. Aquino said the previous management of state-owned Philippine Amusement and Gaming Corp. (Pagcor) had spent an incredible amount of P1 billion “on coffee alone.”

With unveiled sarcasm, he wondered who drank all that coffee and if they had been able to grab some sleep at all these past few years.

The President spoke in Filipino throughout his 53-minute speech before a joint session of Congress. He was interrupted by applause 45 times.

Mr. Aquino mentioned teachers, policemen, soldiers and simple taxi drivers as among the ordinary Filipinos who had joined him in walking “the straight and righteous path.”

“To the Filipino nation, my Bosses who have steered us toward this day: Thank you very much for the change that is now upon us. The Filipino people are, finally, truly alive,” Mr. Aquino said.

After ticking off what he said were his administration’s accomplishments, Mr. Aquino taunted his critics who had accused him of singling out former President Gloria Macapagal-Arroyo and officials under her by filing plunder and other charges against them.

“Some of my critics say that I take this campaign against corruption personally. It’s true: Doing what’s right is personal. Making people accountable—whoever they may be—is personal,” he said.

“It should be personal for all of us, because we have all been victimized by corruption.”

Arroyo, now a Pampanga representative, and her two sons who are also members of the House of Representatives snubbed Monday’s session.

Mr. Aquino stressed: “What is wrong remains wrong, regardless of how long it has been allowed to persist. We cannot simply let it pass. If we ignore the crimes of the past, they will continue to haunt us. And if we do not hold people accountable, then they will do it again and again.”

The President said his campaign against abuse of power and official arrogance—symbolized by his shunning the use of sirens and blinkers on the road—had yielded rewards, such as improved business confidence in the Philippines’ future.

He asked Filipinos to do away with the culture of trying to unduly get ahead of others.

“You created a government that truly works for you. We still have five years left to ensure that we will not return to what once was. We will not be derailed, especially now that what we have begun has yielded so many positive results,” Mr. Aquino said.

Unfortunately, he said, vestiges of the wangwang “mentality,” which have enabled people to take advantage of the system, remained. “It still exists in the private sector.”

Mr. Aquino said that, according to the Bureau of Internal Revenue, there are around 1.7 million self-employed and professional taxpayers—lawyers, doctors, businessmen—who paid only a total of P9.8 billion in 2010.

“This means that each of them paid only an average of P5,783 pesos—and if this is true, then they each must have earned only P8,500 a month, which is below the minimum wage. I find this hard to believe,” the President said.

“Today we can see that our taxes are going where they should, and therefore there is no reason not to pay the proper taxes. I say to you: It’s not just the government, but our fellow citizens, who are cheated out of the benefits that these taxes would have provided,” he added.

Mr. Aquino said it was the wangwang attitude that made irregularities possible in the past administration. He mentioned the two helicopters that the Philippine National Police had bought supposedly as new, although they had been used repeatedly by Arroyo’s family.

“This was the attitude that allowed helicopters to be bought as if they were brand new, but had in fact already been extensively used,” he said.

Mr. Aquino added: “This was the attitude that allowed GOCC (government-owned and -controlled corporations) officials, like those in Philippine National Construction Corp., to pay themselves millions of pesos in bonuses, even as they failed to render decent service and plunged their respective agencies deeper into debt.”

He said his administration’s campaign against abuses represented by the wangwang had restored confidence in the Philippines and prompted an upgrading of the country’s credit ratings by Moody’s, Standard and Poor’s, Fitch and the Japan Credit Ratings Agency.

“Our efforts have yielded results. Just this year, the number of Filipinos who experienced hunger has come down,” he said.

He said the incidence of self-rated hunger fell from 20.5 percent in March to 15.1 percent this June—“equivalent to a million Filipino families who used to go hungry, but who now say they eat properly every day.”

“As for business, who would have thought that the stock market would reach seven record highs in the past year? At one time, we thought that for the PSE (Philippine Stock Exchange) Index to reach 4,000 points would be, at best, a fluke. We now routinely exceed this threshold,” the President said.

“Our innovative fiscal approach has saved taxpayers P23 billion in the first four months of this year. This is enough to cover the 2.3 million conditional cash transfer beneficiaries for the entire year,” Mr. Aquino said.

He said that in the nine and a half years of the Arroyo administration, the country’s credit ratings were upgraded just once and downgraded six times by the different credit ratings agencies.

“Compare this to the four upgrades we have achieved in the single year we have been in office,” he added.

Doing away with the wangwang culture has also revived the confidence of investors in the energy sector.

“One hundred forty companies, all ready to participate in the exploration and strengthening of our oil and natural gas resources, can attest to this,” he said.

He added: “There is confidence and there is hope. The government is now fulfilling its promises.”

Discarding the wangwang attitude has also resulted in savings of more than P2.5 billion in the Department of Public Works and Highways after it stopped anomalous projects, he said. It also resulted in stopping the over-importation of rice.

“What was once an estimated yearly shortage of 1.3 million metric tons is down to 660,000—that’s almost half of the original amount. Even with our buffer of 200,000 metric tons as contingency against natural calamities, it is still significantly less than what was once the norm,” the President said.

Mr. Aquino also cited the Philippines being taken out of the US watch list of trafficking in persons.

“Perhaps, this is the ‘sea change’ that US Secretary of State Hillary Clinton was referring to… If we had not been removed from this watch list, the assistance we have been receiving from the Millennium Challenge Corporation would have been jeopardized,” he said.

Mr. Aquino indicated support for pending legislative bills on compensation for the victims of the martial law regime and improved wages and benefits to household helpers.

“Tomorrow we will deliver to Congress our budget proposal for 2012. I look forward once again to its early passage so that we can build on our current momentum,” he said.

Not once in his speech did the President refer to the demands by workers in his family’s Hacienda Luisita for a redistribution of the lands in the sprawling sugar estate. Notably, neither did he touch on the reproductive health bill.

Mr. Aquino thanked the Roman Catholic bishops and priests, specially Ricardo Cardinal Vidal and Gaudencio Cardinal Rosales, who had been involved in talks with his administration to ease Church-State tensions.

He said the election of Cebu Archbishop Jose Palma as president of the Catholic Bishops’ Conference of the Philippines “bolsters my confidence that the State and the clergy will be able to engage each other in a positive manner.”