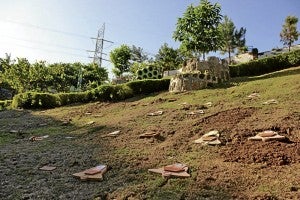 When her palangga (love) of nine years died in March, Faith Castro-Brazil simply wanted a nice and decent burial site.

The 64-year-old woman lives in Quezon City, but her veterinarians told her to bring Samantha, an aspin (asong Pinoy) to Pet Valley Park and Crematory in Silang, Cavite, in March.

It came as a surprise when two male cemetery staff members, dressed in safari uniform, came up to Brazil and took Samantha. They placed the dog in a box that looked like a small casket covered with small flowers.

With accompanying soft music, the box was lowered into the grave as Brazil scattered flowers over it. Prayers were said and the bereaved woman was given her moment to bid Samantha good-bye.

“It was just so beautiful that it made the loss bearable,” she said.

Pet Valley Park and Crematory is a 5,000-square-meter memorial in an uphill area of Silang. It is owned by Manuel Reyes, 40, a veterinarian who specialized in farm animals.

Reyes never opted to open an animal clinic. In 2006, a colleague asked for his help to cremate a client’s dog named Frinkle since Reyes’ family owns a funeral home in Laguna.

It was then that Reyes thought of putting up a crematory for pets and about two years later, a pet memorial.

The cemetery grounds are dotted with headstones on which are engraved the pets’ pictures, their names and ages (one dog year is equivalent to seven human years).

The plots are grouped in 11 sections named after the pets’ traits, such as “hyper,” “affectionate,” “loyal” or “best friend,” that pet owners could choose from. Samantha, for instance, was buried in the plot named “faithful.”

A common graveyard for a “simpler but decent burial” is also found. That section is called “Coco and friends,” named after a client’s dog that was “so friendly Coco would even let burglars inside the house,” Reyes said.

To make for a “relaxing” atmosphere, Reyes placed a blessing area and viewing deck for visitors. Power and water supplies come from a windmill he himself built.

Owners who opt for cremation may choose to take the urns home or deposit them at the park’s columbary. The urns, made of wood, clay or marble, are personalized.

“It’s like keeping something of your pet that you can always touch and feel. Something about a pet you once had that you can show your future children,” Reyes said. He believes in “putting myself in someone else’s shoes or maybe [walking] in someone else’s paws. If you die, how would you want to be treated and remembered?”

The veterinarian said he was not only doing business but would want to make people aware of being more responsible pet owners.

Once, Reyes said, he declined a client’s offer to pay P500 for simply disposing of his dead dog. It was not about the money but the person who did not want to pay the right amount for the service his pet deserved, he said.

Pet Valley has provided services to more than 100 owners, among them movie stars, politicians, generals and government dignitaries. Their pets included dogs, cats and even turtles, a goldfish and a hedgehog.

Reyes said he never advertised but was grateful to veterinary clinics that always referred the cemetery to clients.

A key to the success of the business is trust. Reyes said the company maintains transparency by allowing pet owners to view the cremation. They may also opt to have the burial ceremony videotaped if they could not go to the site.

“You may say that they are just animals. But to some people, pets are their companions the moment they wake up in the morning. They are their life,” said Reyes, who himself owns seven dogs.

No amount, he said, could pay for the “unconditional love” pets give their owners.