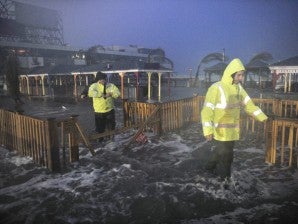 Ralph Verdi, the police chief of Little Ferry, New Jersey, told CNN the waters had risen by four to six feet (1.2 to 1.8 meters) in some areas, as rescuers pulled residents from second-story windows to safety.

“It’s been an extremely difficult night. The power’s still out. We’re doing the best we can,” he told CNN. “Our town is in real trouble right now.”

The New Jersey State Police confirmed on its Twitter page that the levee in the town of Moonachie, near Little Ferry, had broken, without providing further details. Local emergency management officials could not immediately be reached.

The megastorm crashed ashore in New Jersey on Monday, bringing hurricane-force winds and driving rain to much of the US eastern seaboard, flooding parts of New York City and paralyzing public transportation.

The storm had weakened early Tuesday as it moved further inland but millions of Americans were left without power and had only begun to survey the damage.