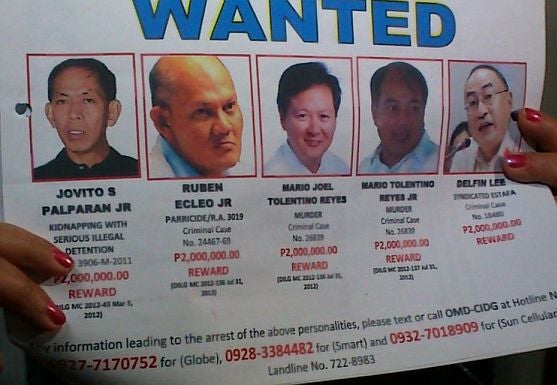 MANILA, Philippines—“Why are there no takers,” Justice Secretary Leila De Lima asked Tuesday saying they have already increased the reward to P2 million but still, information for the arrest of the “Big Five” remains elusive.

Palparan is facing a case for kidnapping and serious illegal detention for the disappearance of UP students Karen Empeno and Sherlyn Cadapan, the Reyes brothers are accused of murdering broadcaster and environmentalist Gerry Ortega, Ecleo was convicted for the death of his wife in 2002 and Lee is facing a warrant of arrest in connection with the P7 billion housing loan scam. 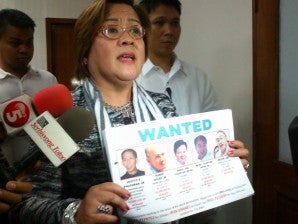 Justice Secretary Leila De Lima shows a new poster of the ‘Big 5’ or the most wanted men in the country. She said they will intensify dissemination of information to encourage public participation in tracking them.

“What the tracker teams are doing is pursue a lead but so far, all operations are negative,” De Lima said at a press conference after a meeting with the Philippine National Police-Criminal Investigation Division Group (PNP-CIDG), National Bureau of Investigation (NBI) tracking teams.

“There was a proposal to increase the reward. Why are there no takers? Is P2-million [reward] too small,” De Lima asked.

She said Malacañang instructed them to maximize the dissemination of posters of the Big Five.

“We should encourage public cooperation to locate these people,” she said.

Of the five, De Lima said only the Reyes brothers have been confirmed to have left the country. She said information they have received showed that from Vietnam, the two moved to Thailand and then Malaysia.

She said they are still verifying if the two managed to sneak into the US. But so far, she said “they have not been issued US visas and their passports had been cancelled.”