De Lima to confer with police on manhunt for Palparan, 4 other fugitives 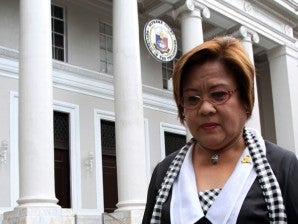 MANILA, Philippines—Justice Secretary Leila de Lima will confer with authorities on Tuesday to find out their progress in the manhunt for the “big five” fugitives including retired Major Gen. Jovito Palparan and former Palawan governor Joel Reyes and his brother.

De Lima said she has asked the special tracker team of the Criminal Investigative and Detection Group of the Philippine National Police for a meeting to get updated on their search for Palparan; Reyes and his brother former Coron, Palawan, Mayor Mario Reyes; Dinagat Representative Ruben Ecleo Jr.; and Globe Asiatique developer Delfin Lee.

She told reporters she was seeking the meeting because she was always asked about the status of the manhunt for the five whenever she attended an international forum on human rights like the one in Geneva, Switzerland earlier in October.

“So I will ask for updates on the progress (of the manhunt),” the justice secretary said.

This as she stated on Monday, that the Department of Justice had no information whatsoever that the Reyes brothers, wanted for the killing of environmentalist Gerry Ortega in 2011, have been hiding in the United States as earlier reported.

She said Immigration chief Ricardo David also told her his office has not received any information that the Reyes brothers were in the US, as Ortega’s daughter earlier pointed out after finding out that the wife of the Palawan governor stayed there for one month early in 2012.

Palparan is wanted for the disappearance of two University of the Philippines students in 2006.

Ecleo, on the other hand, has been convicted for the killing of his wife years ago as well as for a graft case in his hometown in Surigao del Norte.

Lee has a standing warrant of arrest for syndicated estafa in connection with Globe Asiatique’s housing projects in two towns in Pampanga.