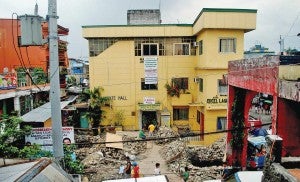 RESIDENTS of Krus na Ligas on the UP Diliman campus have opposed the ongoing construction of a two-story barangay hall annex on a historic plaza which once provided shelter to Andres Bonifacio and other Katipuneros in 1896. Arnold Almacen

Ralliers led by Juana Change trooped on Monday to historic Plaza Sta. Ines in Barangay (village) Krus na Ligas adjacent to the University of the Philippines campus in Diliman, Quezon City, where a two-story annex of a barangay hall to be named after a family of politicians is about to be constructed.

The group, whose name is a play on the Filipino slang for a credit-grabber, targets politicians who unashamedly take credit for government-funded projects by putting their names on tarpaulins, billboards and other mediums.

Together with other members of the Anti-Epal Movement, including cultural activitist Carlos Celdran, Paner expressed the group’s full support for the residents’ plan to stop the construction of a two-story barangay hall annex building on Plaza Sta. Ines, which was declared a historic site by the National Historical Institute (NHI) in 1998.

This is where Andres Bonifacio and other Katipuneros briefly rested on Aug. 26, 1896, to gather their bearings and plan their next move following a clash with Spanish soldiers at Pasong Tamo. It is also the site of Holy Cross Parish, the second-oldest church in Quezon City.

“This [plaza] is virtually the heart of Krus na Ligas. This is where religion, culture, history and community converge. They (politicians) would ignore the plaza’s history just to have a building with their names on it,” she said.

According to her, it was bad enough that politicians would put their names on tarpaulins announcing the project but to destroy a historical site was worse.

The Inquirer was told the two-story building, a P3-million project spearheaded by barangay chairman Julian Santos and funded by Councilor Vincent Belmonte, would be named Belmonte Hall. It would be an annex of the first Belmonte Hall, a three-story building that serves as the barangay hall and police precinct.

Portions of the plaza have already been dug up for the laying of the foundation for the new building, which would be built in front of the old hall.

Inquirer that he and other residents found out about the project only when they received the invitation for the groundbreaking rites held on September 15.

“There was no consultation among the residents so we were surprised,” Roberto said.

He said the church and residents in the area have written to both the barangay chairman and Councilor Belmonte to express their opposition to the project, but the two have yet to respond.

A signature campaign was also launched with more than 2,000 residents signing a petition calling for a halt to the project, but this was also ignored by both officials.

The Inquirer, however, learned from the councilor that he was scheduled to hold a dialogue with residents Monday at city hall. He is one of several Belmontes who hold elective positions in the city. The others are his uncle Rep. Feliciano Belmonte, whose daughter is Quezon City Vice Mayor Joy Belmonte.

A longtime resident of the area, Lola Francisca, 85, spoke to the crowd and said that as a child, she used to play with other children in the area.

“History was made in that plaza, which is something that should be cherished,” she told them.

Juan Francisco, a 68-year-old resident who was born in the area, reminisced that every afternoon, he and his friends would go to the plaza to talk about their lives or listen to the radio.

“Sometimes we would share ghost stories. Then the children would run away because they would get scared,” Francisco said.

Septuagenarian Serena Orillanida said the plaza has long been the venue for meeting friends or special occasions.

“Where will we hold the Easter Salubong (the ritual re-creating the first meeting of Jesus and Mary after His resurrection) or the fiesta?” Orillanida, an optometrist, asked.

The Inquirer tried but failed to contact Santos to get his side.

For his part, former barangay captain and now councilor Silverio Cruz said the building would serve as an office for him and seven other councilors.

“Our office right now is so small. The tables are very close to each other and we can hardly move and work. Sometimes, we would ask the staff of the barangay captain to lend us their desks,” he said.

The other barangays have offices for their councilmen, he added. “We need the office so we can perform our duties.”

Contrary to the claims of the residents that they were not consulted, Cruz said the construction of the building was announced but the barangay chairman initially said it would be a museum.

“We should not question the project because it is for the councilmen and future councilmen,” Cruz said.

Paner and other members of the Anti-Epal Movement, meanwhile, called on the NHI to intervene and stop the desecration of historic Plaza Sta. Ines.

“A true leader listens to and follows his bosses. What kind of leader refuses to follow his bosses?” she said.—With a report from Rima Granali