Halloween surprise: Co-accused, not Arroyo, gets TRO on plunder case 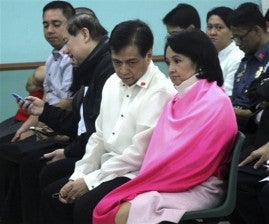 Former Philippine President Gloria Macapagal Arroyo, right, talks to an unidentified counsel prior to the start of her arraignment at the Sandiganbayan Monday, Oct. 29, 2012, at suburban Quezon City. The Supreme Court clarified Monday that the temporary restraining order of the high court was actually on the arrest order of one of those charged of plunder together with Arroyo. AP PHOTO/ERNESTO LASIG, PHILIPPINE NATIONAL POLICE

MANILA, Philippines—It was neither a trick nor a treat. Maybe, it was just a plain mistake.

For a moment there on Monday, everyone thought former President Gloria Macapagal-Arroyo would be able to leave from her detention at the Veterans’ Memorial Medical Center in Quezon City, courtesy of the Supreme Court on the eve of Halloween.

This was because the SC information office advised reporters on Monday that the high court would issue and upload a “copy of the SC TRO on former GMA’s arraignment before the Sandiganbayan on PCSO/plunder case” even before it handed down the official copy.

But when reporters finally got the copy, they asked the information office why the TRO was not addressed to Arroyo, now a Pampanga representative, but to someone else.

After a few hours, the SC information office clarified through text and e-mail that the temporary restraining order of the high court was actually on the arrest order of one of those charged of plunder together with Arroyo, in connection with the alleged misuse of funds of the Philippine Charity Sweepstakes Office.

“This is to clarify that the Oct. 24, 2012 TRO issued by the Court’s Third Division in GR Nos. 203693-94, Plaras v. Sandiganbayan, enjoins the implementation of the warrant of arrest against petitioner Nilda Plaras as ordered in the assailed resolution of the Sandiganbayan dated Oct.3, 2012 in Criminal Case no. SB-12-CRM-0174,” said lawyer Maria Victoria Gleoresty Sp. Guerra, acting public information office chief.

What the high court decision meant was that it was stopping the arrest order by the Sandigan on Plaras, former Commission on Audit intelligence fund unit head.

In a three-page order, which was given by the authority of Associate Justice Presbitero Velasco Jr., chairman of the Third Division of the Supreme Court,  he said his division adopted a resolution last October 24 that, “without necessarily giving due course thereto, resolves to require respondents to comment (not to file a motion to dismiss) within 10 days from notice.”

It also issued a TRO as requested by Plaras, prohibiting the Sandiganbayan from implementing the arrest warrant against Plaras, “effective immediately and continuing until further orders from the court.”

The SC public information office only got the October 24 resolution on Plaras’ petition on Monday, when Arroyo was arraigned for plunder before the Sandigan.

And while Arroyo’s camp made a similar appeal to the high court last October 24, she may have to wait until  the high court returns from its nine-day break, or until November 6. The high court went on break starting Monday, in observance of the All Saints’ Day and All Souls’ Day commemoration.

Arroyo is at the VMMC because apart from her neck ailment, she is also suffering from a heart ailment.

Arroyo asked the high court last week to stop the proceedings of the Sandiganbayan on her plunder case there. She also asked it to stop her continuing arrest and detention.

In her petition, the former President accused the anti-graft court of grave abuse of discretion when it acted with “precipitate haste” in issuing two resolutions dated October 3 and 4 denying her motion for judicial determination of probable cause.

Plaras, meanwhile, sought for a certiorari and prayed for a TRO or the issuance of a writ of preliminary injunction on three resolutions by the Ombudsman and Sandiganbayan in connection with the issuance of an arrest warrant against her.

Meanwhile, Justice Secretary Leila de Lima defended the Department of Justice’s recommendation to file a technical malversation case against Arroyo in connection with the alleged misuse of funds of the Overseas Workers’ Welfare Fund, which the Ombudsman had dismissed last week.

De Lima said her department recommended the filing of such a case against the former President “based on the facts and the available documents.”

“That’s why it’s regrettable that the Ombudsman had a different finding,” she told reporters, adding that it was not the DOJ but the complainant, former Solicitor-General Frank Chavez, who should file a motion for reconsideration before the Ombudsman’s office.

She said when she discussed the dismissal of the case against Arroyo before the Ombudsman with the Prosecutor General, he too was surprised that it was not affirmed by the latter.