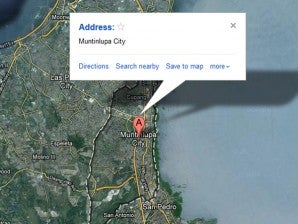 MANILA, Philippines – The Development Bank of the Philippines in Muntinlupa City was allegedly broken into over the long weekend by thieves, who had apparently gained entry by sawing off the window grills of the bank’s toilet then disabled the security alarm.

Chief Supt Leonardo Espina, head of the National Capital Regional Police Office, said the burglary, which could have happened between Oct. 26 and Oct 29, was discovered only on Monday at around 8 a.m.

Espina said the thieves were believed to members of the so-called “Acetylene Gang.”

The bank employees also found the vault empty with a gaping hole, measuring 2 feet in diameter.

Senior Supt. Conrad Capa, officer in charge of the Muntinlupa police, said investigators still had no clue as to how many persons were involved in the break-in because the thieves had covered the closed circuit television cameras with paper and removed their CDs where footages are stored.

The thieves had also cut off the cables connected to the bank’s alarm so they could slip out of the premises undetected by the security guards on duty.

Authorities have yet to determine the amount of money stolen from the DBP.

Read Next
Gov’t urged to aim for ‘zero casualties’
EDITORS' PICK
Look Through: The fate of impounded stray dogs
House energy committee chair Arroyo bats for cheap electricity
What to watch out for when selecting a video surveillance solution
23,000 cops to be deployed nationwide for school reopening
Unleash the photographer in you this World Photography Day with vivo smartphones
DOH says COVID-19 cases plateauing, but public shouldn’t be ‘complacent’
MOST READ
Sharon Cuneta asks for prayers for friend in ICU who suffered silent stroke
Korina Sanchez reunites with former ABS-CBN co-anchors Julius Babao, Cheryl Cosim
Light therapy could be the answer to your sleep problems
Solons file resolutions seeking probe on ABS-CBN, TV5 merger
Don't miss out on the latest news and information.