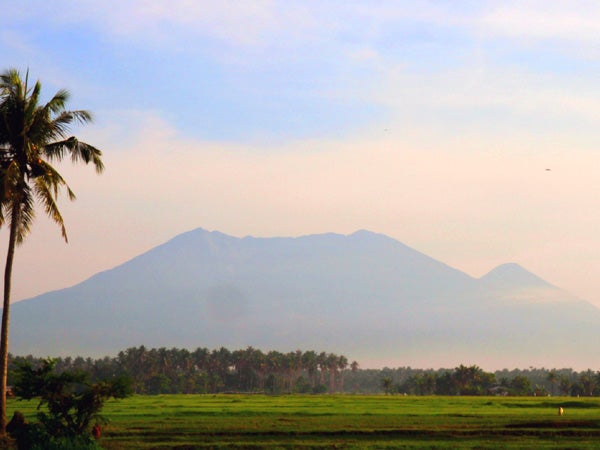 The scenic view of Mount Banahaw and the verdant rice field in Sariaya, Quezon is a feast to the eye. DELFIN T. MALLARI JR./PHILIPPINE DAILY INQUIRER

LUCENA CITY, Philippines – Unscrupulous groups use the Internet to lure mountaineers and nature-trippers to gain access to the closed mystical Mount Banahaw in exchange for a fee, an official of the Department of Environment and Natural Resources disclosed on Sunday.

“When we conducted our own investigation, we found out that the pseudo-mountaineer groups charge P1,500 per person in exchange for an unhampered access and camping inside the moratorium area of Banahaw de Dolores (the part of Banahaw facing Dolores, Quezon),” Pangan said in an interview Sunday afternoon.

She said most of the victims were over-eager mountaineers and nature-trippers from Manila who were curious to re-discover Banahaw after its long closure.

The illegal mountain hikers entice their victims through several Facebook pages that they created. The suspects invite their hikers and nature-trippers to participate in mountain clean-up activity with a bonus camping for a day or two in several spots inside the moratorium areas, Pangan said.

“The syndicate assures their victims that their mountain activity has a permit from the DENR. The Facebook page even posted photos of several groups enjoying their stay inside the prohibited areas,” Pangan told the Philippine Daily Inquirer.

She declined to name the Facebook pages. “We’re still gathering enough evidence to pin down the persons behind the sites,” she said.

But she warned mountaineers and urbanite trekkers not to be deceived by Facebook accounts that have “Mt. Banahaw” in their address.

Pangan admitted that she had issued “clean-up” permits several months ago to some mountaineering groups on the condition that their project would only cover outside the prohibited areas.

She identified a certain “Victor”, a resident of the mountain village of Sta. Lucia in Dolores, as one of the initiators of the purported clean-up project.

“But we learned that the permit holders broke the rules and even initiated a camped-out at the peak. Apparently, they used the clean-up project as front to their illegal mountain sojourn,” the DENR official said.

She said her office had already stopped issuing clean-up permits. But she learned from barangay officials at the foot of the mountain that her signature had been forged by the con-groups.

“My signature was scanned and affixed to the fake DENR documents which they showed to their gullible victims,” Pangan said.

With the lack of personnel to help her in the monitoring, Pangan said she had asked the help of policemen, Army soldiers and concerned villagers in tracking down the illegal intruders.

“We will arrest any intruders,” she warned.

Pangan reiterated that the Protected Area Management Board for Mounts Banahaw and San Cristobal had officially declared Banahaw de Dolores and Banahaw de Tayabas off limits to trekkers for the next three years or until 2015.

The park superintendent said Banahaw de Dolores with an easy access to the peak remains closed the public to protect its gains from its being off-limits to trekkers since 2004.

Banahaw, which used to be visited by about half a million people during the Holy Week, was sealed closed to the public to allow areas damaged by slash-and-burn farming and littering to recover.

She said the mountain side in Tayabas town is still off-limits to prevent hunters of the fabled Japanese treasures from destroying the pristine caves found in the area.

“Mountaineers can climb Mt. Banahaw from Lucban town and any parts of Laguna but they are required to secure permit from my office to make their hike legal,” Pangan said.

She said mountaineers and urbanite trekkers can also climb Mount Cristobal with a corresponding permit.

Mt. Banahaw straddles the municipalities of Lucban, Tayabas, Sariaya, Candelaria and Dolores in Quezon province and parts of the towns of Rizal, Nagcarlan, Liliw and Majayjay and San Pablo City in Laguna province.