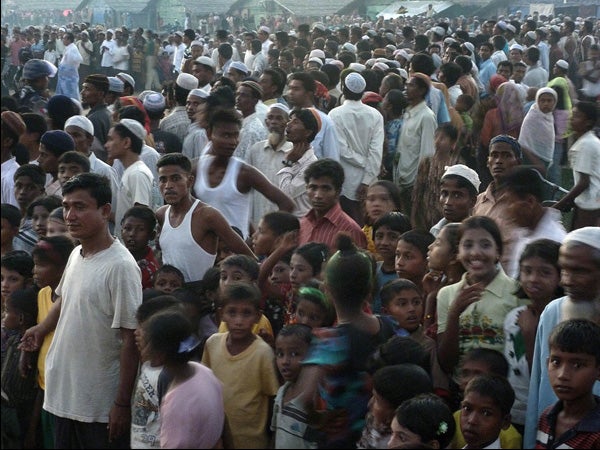 YANGON – More than 22,000 people from mainly Muslim communities have been displaced by fresh unrest in western Myanmar that has killed dozens and seen whole neighbourhoods razed, the UN said Sunday.

The United Nations chief in Yangon, Ashok Nigam, said government estimates provided early Sunday were that 22,587 people had been displaced and 4,665 houses were set ablaze in a new wave of communal unrest that swept Rakhine state this week.

“We have to say that this is a current estimate and we suspect there may be additional numbers,” he told AFP, adding that 21,700 of those made homeless were Muslims.

“Those 22,000 people are still in the locality where they were, they are not moving. The boat people are separate,” he told AFP, referring to thousands of additional displaced people who have surged towards the state capital Sittwe.

The latest fighting, which has prompted international warnings that the nation’s reforms could be under threat, has killed more than 80 people, according to a government official who asked to remain anonymous, bringing the total toll since June to above 170.

Read Next
7.7 earthquake on islands off west coast of Canada – USGS
EDITORS' PICK
Supply of white onions gone since July, growers say
What to watch out for when selecting a video surveillance solution
House energy committee chair Arroyo bats for cheap electricity
vivo brings to the Philippines a powerful smartphone with a slimmer body, the vivo Y02s for only PHP 6,499
Bakers’ turn: P4 hike on bread prices sought
PH importing sugar after all: Marcos okays 150,000 MT
MOST READ
Suspect in rape-slay of teenaged biker arrested in Camarines Sur
DepEd to give teachers P5K cash aid on 1st day of classes
LOOK: Miel Pangilinan dazzles in glittery pre-debut shoot
DOJ indicts bank officer in $2.1 billion Wirecard fiasco
Don't miss out on the latest news and information.