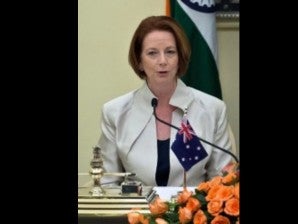 SYDNEY – An ambitious plan aimed at maximizing links with booming China and other soaring Asian economies will power Australia into the world’s top 10 wealthiest nations by 2025, the government said Sunday.

The sweeping policy blueprint, titled “Australia in the Asian Century”, sets a series of lofty goals for the next 13 years to seize upon Asia’s rapid ascent as a global economic powerhouse led by the modernisation of China and India.

“The scale and pace of Asia’s rise is staggering, and there are significant opportunities and challenges for all Australians,” Prime Minister Julia Gillard said.

“It is not enough to rely on luck – our future will be determined by the choices we make and how we engage with the region we live in.”

By 2025, Gillard said Australia’s GDP per person – a measure of personal wealth – would jump into the world’s top 10, joining the likes of Qatar, Singapore, Hong Kong, Brunei, the United Arab Emirates and the United States.

It is currently ranked 13th, according to the International Monetary Fund.

Its school system would be in the top five and it would have 10 of the world’s best 100 universities, with studies of Asia a core part of the national curriculum and Mandarin, Hindi, Indonesian and Japanese “priority” languages.

One-third of Australia’s economy would be underpinned by trade with Asia, up from one-quarter today, and it would be one of the world’s top five countries to do business in.

The country’s top 200 listed companies and government bodies would be required to boost “Asia literacy” on their boards, with one-third of members to have “deep experience in and knowledge of Asia” by 2025.

China, India, Indonesia, Japan, South Korea and the US would be Australia’s key partners and the rise of Asia’s middle classes would provide opportunities in industries ranging from health and aged care to food and travel.

Treasurer Wayne Swan said the Asian region would soon be the world’s largest production and consumption zone and was set to overtake the economic output of Europe and North America combined by the end of this decade.

Average personal wealth in Asia was set to double by 2025 and even the most conservative projections predict four of the world’s 10 largest economies will be in Asia by then, Swan said.

“Asia’s transformation will bring unprecedented opportunities for Australia beyond resources,” he added.

“Asia’s middle class (is) anticipated to increase by more than 2.5 billion people by 2030 and account for around 60 percent of global middle-class consumption.”