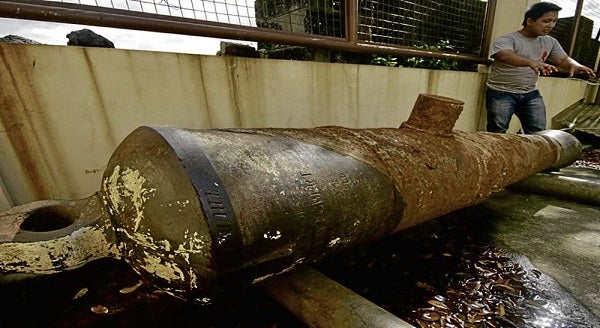 FINALLY unearthed, the massive “Egbert cannon” will undergo restoration by experts from the National Historical Commission of the Philippines. ALANAH TORRALBA

For years it lay partly buried, of all places, in the middle of a dirt basketball court. But local residents who had long considered it part of their community finally agreed to have it excavated, restored, and shared with the rest of the Filipino people.

A 9-ton cannon dating back to the 1800s was recently unearthed in a slum area near Valenzuela City Hall in Barangay Malinta. 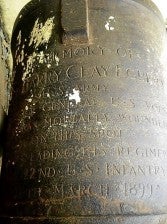 INSCRIPTIONS made on the cannon during the American period pay tribute to a US colonel killed by freedom fighters in the Philippine-American War. NATHANIEL R. MELICAN

The artillery piece, about 10 feet long, was made in Spain but later dedicated by the Americans to a US colonel who served in the Philippine-American War, according Jonathan Balsamo, curator of Museo Valenzuela and head of the restoration project.

Balsamo said the war relic would undergo restoration in the next few months as a heritage piece of the city. And though the cannon bore inscriptions in memory of an American officer, he said it should now serve as a reminder of the Filipinos who fought in the Battle of Malinta, a rarely told episode in the war that raged from 1899 to 1902.

“The cannon’s body indicates that it was made in 1859 in Trubia, a village in Asturias, Spain, known for making cannons,” Balsamo told the Inquirer in an interview last week.

After the war, additional inscriptions were made and remained legible to this day: “In memory of Col. Harry Clay Egbert, US Army, Brigadier General–US Volunteers, who was mortally wounded on this spot while leading his regiment, the 22nd US Infantry, 26th March 1899.”

“Historical accounts indicate that Egbert died in the Battle of Malinta. And what is fascinating about this part of the Philippine-American War is that while the Americans were able to control Malinta, they did not defeat the Filipinos in actual battle,” Balsamo said.

The Filipino fighters took cover in a church when they saw the Americans approaching, he said, quoting records. Aware of the range of their rifles, they waited for the right distance before firing at enemy troops as they went past the church. 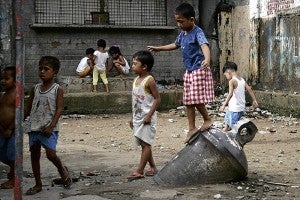 BEFORE it was taken off the ground, the heavy gun dating back to the mid-1800s appeared as a stump in the middle of a dirt basketball court. VALENZUELA PUBLIC INFORMATION OFFICE

“That was when Egbert was killed,” he said. “The Filipinos pulled back only when they ran out of bullets.”

The American colonial government under Acting Governor General Henry Ide later marked Egbert’s fall by building a memorial in the area. A 1906 proclamation designated a tract of land in Malinta (then still under the jurisdiction of Bulacan province) as the Egbert Monument Reserve.

“The place was landscaped and this cannon, complete with the inscriptions, was erected at the center of the monument,” Balsamo said.

However, the monument fell into neglect in the years that followed. In the 1990s, the cannon ended up being “swallowed” by the earth after treasure hunters dug a tunnel beneath it, Balsamo said.

After the diggings, only the cannon’s tip—showing the parts known as the knob and the neck—remained visible aboveground, and it oddly jutted out at an angle in the middle of what is now an unpaved basketball court. Also, parts of fence marking the monument still stand.

“Over the years, under previous city administrations, there have been many attempts to recover the cannon. They all failed for various reasons, but mainly because residents in the area resisted the plan,” Balsamo said.

“They were reluctant to have the cannon excavated, saying their ancestors were allowed by the Americans to look after that piece of land,” he said. Some residents even threatened to bring the issue to court.

“We had to hold a dialogue in late September to inform them that we will restore the cannon. It was only then that we were able to persuade them and start digging,” the museum official said.

It took around 60 workers two days to get the rusty cannon out and another day just to drag it to the road where a forklift was waiting.

The massive gun is currently kept in a warehouse, its restoration to be funded by the city government and handled by experts from the National Historical Commission of the Philippines.

“After the restoration, we plan to put it on display at City Hall grounds for everyone to see,” Balsamo said. “But through it we are now recognizing the unnamed Filipino soldiers who fought Egbert and his troops in the Battle of Malinta.”

“For me, this cannon is now about the Filipinos who showed courage and nationalism, soldiers who were never paid to fight yet stood up in defense of our country,” he said. “This is not just about the appreciation of an artifact. It goes deeper. It should make us think: What form of heroism can we do for our country now?”