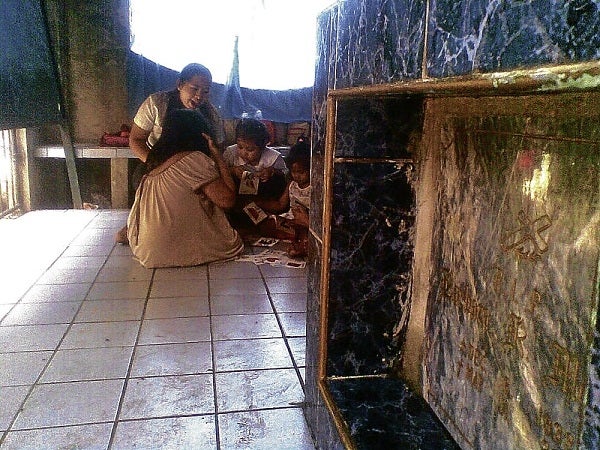 CEBU CITY—It is an unlikely place to hold preschool classes—a mausoleum built in the middle of the cemetery.

Every day, Mary Jane Edil, 27, goes to two cemeteries in Cebu City to teach nursery and kindergarten lessons to children of families living among the dead.

“But this is better than not be able to learn at all. And for them, this is a normal life, since they were born and have been living in the cemetery,” she said.

Edil is part of the Action for Nurturing Children and Environment Inc. (Ance), a nongovernment organization (NGO) founded in 2006 by Fr. Max Abalos. The group aims to uplift the poor through education and community empowerment.

Ance, which is supported by the Germany-based Ein Hertz Fur (One Heart for Children), has more than 100 scholars on the elementary, secondary and collegiate levels. It operates three day-care centers—two in Lapu-Lapu City and one in Cebu City.

After obtaining her degree in Bachelor of Secondary Education in 2007 from the University of the Visayas, Edil joined an NGO called the Tuburan sa Paglaum and was assigned to teach in a school for poor children at the North Reclamation Area in Cebu City.

After two and half years, she joined Ance and was deployed to a day-care center in Barangay Ibo, Lapu-Lapu. In April, she was given a new task: Teach children in the cemeteries.

Ance had noticed that most children living in Carreta cemetery on General Maxilum Avenue and Cebu Chinese Cemetery at North Reclamation Area didn’t go to school because their parents could not afford it. The parents work in the cemeteries either as tombstone makers or candle vendors.

At least 40 families live in Carreta, one of the city’s largest cemeteries managed by Cebu Metropolitan Cathedral and Sto. Rosario Parish. The Chinese cemetery, the oldest and largest Chinese cemetery in Cebu, is home to about 30 families.

Ance decided to “bring the school” to the children by putting up a day-care center for those aged 2-6 years so their parents didn’t have to spend for their basic education.

“Taking the situation as it is, children cannot go out of the cemeteries to study. We decided to take action on our own, by bringing education to them,” Father Abalos said.

The Medina family allowed Ance to put a blackboard, educational charts and other materials inside the mausoleum at Carreta. At the Chinese cemetery, a caretaker also allowed the group to use a mausoleum as classroom.

At first, Edil was uncomfortable teaching inside a “classroom” with a tomb in the middle. Besides, she said, tombs and mausoleums scared her.

But the warm welcome of the parents boosted her spirit and gave her strength to overcome her fears.

Ance had provided monobloc chairs for the children, but when they returned the next morning, the chairs were gone. The theft was repeated several times, prompting Edil to ask the children to bring their own seats. Sometimes, though, the children sit on the floor or on the tombs.

“I feel fulfilled seeing these children learn from all the things I teach them. It’s tiresome and far from comfortable but at the end of the day, this is what makes me happy,” Edil said.

The parents were also happy. “We don’t pay for school fees and fare,” said Susan Ylaya, whose two children, aged 3 and 4 years, are pupils of Edil.

Edil will have a short break from teaching on Nov. 1 and 2, when classes will be closed to give way to mourners. But after All Saints’ Day and All Souls’ Day, it will be work as usual for her.