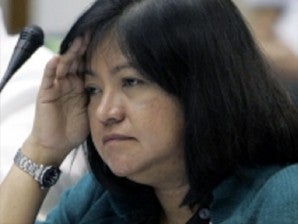 A prosecutor on Thursday asked the Sandiganbayan to order the Department of Foreign Affairs to cancel the passports of three former officials of the Philippine Charity Sweepstakes Office (PCSO) who have left the country despite  warrants issued for their arrest on charges of plunder.

In a motion for the cancellation of passports before the antigraft court’s First Division, Assistant State Prosecutor Julietta Zinnia Niduaza identified the three accused who remain at large as former General Manager Rosario Uriarte and former board directors Jose Taruc V and Ma. Fatima Valdez.

The three face arrest in connection with their alleged participation in the alleged embezzlement of P366 million in PCSO intelligence funds between January 2008 and June 2010.

Niduaza attached certifications from the Bureau of Immigration confirming the three had flown abroad.

The three are among the 10 accused, including former President Gloria Macapagal-Arroyo, now a representative of Pampanga, by the Office of the Ombudsman with plunder for supposedly having conspired to embezzle the P366 million from the PCSO.