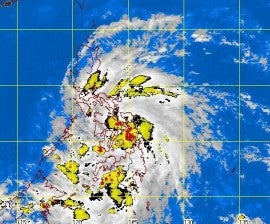 SURIGAO CITY, Philippines—Tropical Storm Ofell battered this city and neighboring towns with heavy rains and strong winds since dawn Wednesday, leaving low-lying areas flooded in up to knee-deep water. There were no immediate reports of casualties but hundreds of passengers were stranded as the authorities suspended ferry services.

More than 1,100 passengers were stranded in Surigao del Norte and Dinagat Islands ports on Wednesday due to the storm.

Lt. Joel Simo-ag, commander of the Philippine Coast Guard in Surigao del Norte, said maritime operations in the ports of Surigao City, Lipata, Dapa and Soccoro in Surigao del Norte and San Jose on Dinagat Island were suspended as Ofel battered the area.

“The Coast Guard has imposed a no-sailing order in Surigao and Dinagat. We have a total of 1,105 passengers stranded,” Simo-ag told the Philippine Daily Inquirer by phone.

Simo-ag said his men were on heightened alert and were continuously monitoring the effects of the storm, particularly in Surigao City’s port where most of the stranded passengers were.

He said the “no sailing” order stranded four passenger  and cargo ships, 40 motorized bancas and several dozen  buses and trucks.

Blanche Gobenchiong, Caraga regional director of the Office of Civil Defense, said all disaster agencies in the region were on red alert status for possible flooding and landslides in high-risk areas, particularly in coastal and riverside villages.

“Fortunately, no untoward incident due to the typhoon has so far been reported, maybe because Ofel was not that strong,” she said.

In Butuan City, several commercial flights in and out of the regional capital were cancelled.

In Cayayan de Oro City, Carol Cruz, a resident of Barangay Macasandig, had been following Ofel’s movements since Tuesday night. She prepared a light travel bag containing a flashlight, clothes, cash, water and food in case they had to evacuate due to flooding.

Cruz said she has not recovered from the trauma that her family went through during the  the flashfloods triggered by Tropical Storm Sendong disaster last December  where she lost a relative, as well as almost all her belongings.

“The fear is there… we live 500 meters away from the river, so, if it rains hard today for more than three hours, we will evacuate our home,” she said.

Barangay Chair Aaron Neri said Macasandig was on alert status and that the council had already prepared its contingency plan.

In the Camiguin province, ferryboat trips have been canceled since Tuesday.

Stranded passenger Glen Flores said he and his group were supposed leave the Balingoan Port on Tuesday but the Coast Guard ordered the suspension of boat trips to Camiguin.

Flores said they were supposed to join the festivities for the Lanzones Festival in Camiguin on October 28.

In downtown Tagum City in Davao del Norte, strong winds toppled several trees near the city police station, but did not cause other damage or injuries.