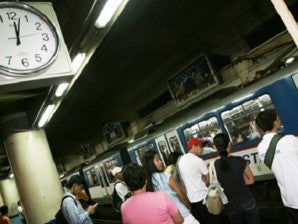 MANILA, Philippines – Senator Gregorio Honasan on Wednesday cautioned the government against rushing the implementation of a fare hike for Metro Rail Transit and Light Rail Transit, saying a petition might be filed against it before the Supreme Court.

“He can’t do that unilaterally, baka magka-TRO-han (a TRO might be made),”  Honasan said over the phone, referring to  newly-appointed Transportation Secretary Joseph Emilio Abaya.

“What I’m only saying is that let’s not rush into it until there are adequate consultations,” he said.

Since Abaya  just took over the  Department of Transportation and Communication (DOTC), Honasan said it would be prudent that the DOTC chief  must first conduct comprehensive discussions and  hearings before  imposing the  planned fare hike.

“For example, what is the bottom line? Who profited from the construction of the MRT and LRT, particularly the increase in property values? How much?” the senator asked.

“How much money did the investor put in? How much are they earning, including the increase in property values?”

Honasan also reminded the government of the 12 percent cap/limit on profits from public utilities as provided for under the Public Service Law.

“This should be our guide,” he said.