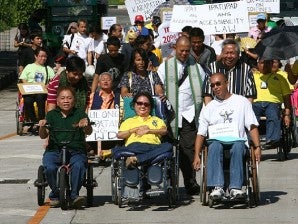 CEBU CITY—Every time he goes to the voting precinct on election day in Bohol, Mateo Sagaquilas would always hear people say that he should not vote because of his blindness.

“But I am aware that it is my right to vote. It is in our law that PWDs (people with disabilities like me can vote,” said Sagaquilas, head of the Kalipunan ng mga may Kapansanan sa Pilipinas-Central Visayas.

His group has asked the Commission on Elections (Comelec) to provide a separate precinct for them in next year’s elections, saying PWDs have long been facing difficulties when exercising their right of suffrage.

Carlos Maleces, vice president of the Kalipunan ng mga may Kapansanan sa Pilipinas, said the benefits of setting aside a separate precinct for PWDs would outweigh whatever its disadvantages would be.

“We sometimes feel awkward during election that even if there is already a long line of people who are going to vote, we PWDs are always prioritized,” said Malacese, who wears a prosthetic right leg.

“We find it unfair on the part of people with no disabilities who arrive in polling precincts early,” said Malacese.

According to Sagaquilas, Comelec Chairman Sixto Brillantes had expressed support for the group’s proposal during a conversation at a seminar of the National Anti-Poverty Commission.

Veronico Petalcorin, Comelec assistant regional supervisor, said the concern of PWDs was valid and setting aside a separate precinct for them would be a good development for elections in the country.

Petalcorin, however, said the Comelec should first issue a resolution allowing the setting up of separate precincts for PWDs, which would also require additional funding for the hiring of more teachers to attend to PWDs.