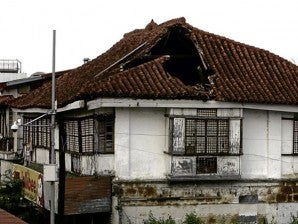 A PORTION of the roof of the ancestral house in Binan City of Jose Rizal’s mother, Teodora Alonso, collapses leaving a gaping hole visible from afar. RAFFY LERMA

SAN PEDRO, Laguna—Time is running out fast for the preservation of one of the country’s heritage sites, the house once owned by the mother of national hero Jose Rizal, in Biñan City, Laguna.

Shortly after midnight on Sunday, a big chunk of the roof of the 200-year-old Alberto Mansion, the ancestral home of Rizal’s mother, collapsed anew.

“What was left of the roof was just one-fourth of it,” said Rosauro Sta. Maria, head of United Artists for Cultural Conservation and Development (UACCD).

Last week, a portion of the roof caved in, prompting an online campaign to salvage the house before it collapses.

The Alberto Mansion is one of the remaining Spanish-era houses in Biñan. It once belonged to the family of Teodora Alonso, mother of Jose Rizal.

In 2011, the house was declared a cultural heritage of Biñan through a city ordinance but not by the National Historical Commission of the Philippines (NHCP).

The city government and UACCD, a local cultural group, opposed the demolition of the house in 2010 after its owner, Gerardo Alberto, sold the house to a heritage resort in Bagac, Bataan.

“Since last week, we’ve been crying for help because the house looked like it was really about to collapse. And it happened,” Sta. Maria  said.

“Since the structure is already very weak, I do not want to use the word ‘demolish,’ but rather it has to be restored right away. It looks like it cannot withstand strong rain,” he said.

Heritage advocates blamed the rundown state of the house to its owner.

“(The roof) collapsed not because the house was rotting. The house was in almost perfect shape except for a few leaks in the roof until they dismantled the interior even without a demolition permit from the city government,” Sta. Maria said.

A replica of the Alberto Mansion was recreated at Las Casas Filipinas de Acuzar in Bataan using the stairs, doors and wood planks taken from the original house in Biñan.

On Monday noon, Biñan Vice Mayor Arman Dimaguila said the city council would convene to pass an ordinance authorizing the city government to take over the renovation of the house.

“If we wait for the national government (to act), the house would have already collapsed (by the time any action is taken),” he said.

Last week, the city government wrote Alberto, ordering him to immediately reinforce the structure, but received no response from the owner.

No one from NHCP has also visited the house since the roof caved in, Sta. Maria said.

“I am not related to the family (of Rizal) but I felt like I lost someone,”  he said. “How indifferent have we become?”