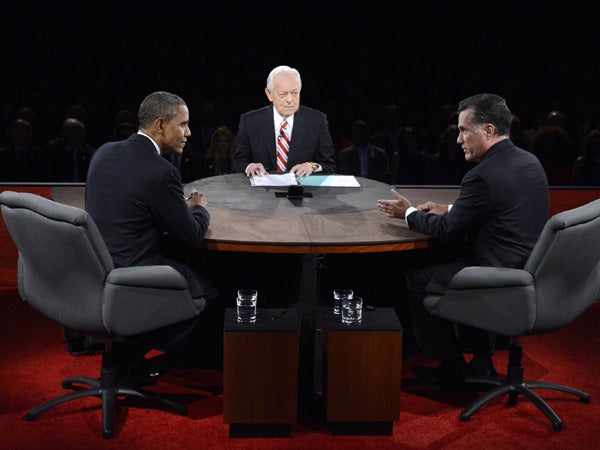 Moderator Bob Schieffer listens to US President Barack Obama and Republican presidential candidate Mitt Romney during the third presidential debate on October 22, 2012 at Lynn University in Boca Raton, Florida. Obama and Romney battled over foreign policy in their last debate of a White House race that is deadlocked with two weeks to go. The rivals faced a final chance to land a decisive blow in front of millions of television viewers, before a last-ditch dash for votes in a bitter campaign that has exposed the sharp political divide splitting America in two. AFP / MICHAEL REYNOLDS -POOL

Asked by the moderator in their last campaign debate what was the biggest danger the United States faces, Obama said: “Well, I think it will continue to be terrorist networks—we have to remain vigilant, as I just said.”

Romney said: “The greatest threat the world faces is a nuclear Iran.”

But, immediately after naming their greatest bugbear, both candidates quickly pivoted to the subject of China, stressing the action they would take to level the playing field in competition with its growing economic might.

“With respect to China, China’s an adversary and also a potential partner in the international community if it’s following the rules,” Obama declared, after a cursory nod to the moderator’s question.

“So my attitude coming into office was that we are going to insist that China plays by the same rules as everybody else,” he added, accusing Romney of failing to oppose the export of US jobs to Chinese manufacturing centers.

Romney almost did not answer the question about the greatest threat at all, beginning an answer on the economy, then darting back briefly to name-check Iran before declaring: “Let’s talk about China.”