Enrile: I have no Torrens title to Senate presidency | Inquirer News

Enrile: I have no Torrens title to Senate presidency 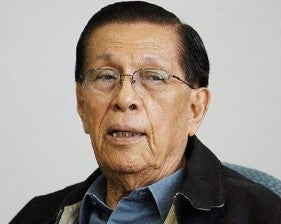 Saying that he had “no Torrens title” to the Senate presidency, Sen. Juan Ponce Enrile again expressed willingness to surrender the post to anyone who could gather a new majority.

“I have no Torrens title over this position (and if ouster) is the price I’ll have to pay to maintain my self respect, then so be it,” Enrile said in a hastily arranged news conference in his office Monday.

Sen. Miriam Defensor-Santiago said Sunday that many of the senators were just waiting for a signal before making the presence of a new majority felt in the upper chamber.

on reproductive health (RH) and on sin taxes for tobacco and alcohol—could cost him his seat.

But Enrile said he did not mind leaving the rostrum at any time and would even welcome any moves to turn him back into an average senator, “because then, I’ll be able to take a position (on issues being tackled in the chamber).”

He said that as Senate President, “I have to consider the position of each of (the other senators). But if I am not in (this post), I can display the position that I want. I will no longer deal with the position of others and just argue my case.”

But Enrile could not resist taking potshots at his critics and those he believed were after the Senate presidency, describing them as shifting from one party to another, depending on who is occupying Malacañang.

“I have remained loyal to my party no matter how small,” said Enrile, a member of the Pwersa ng Masang Pilipino.

He added that he had already prepared the amendments he wanted included in the RH bill so that it could finally be voted on, and would not oppose the passage of the so-called sin tax bill aimed at raising government collections from tobacco and alcohol products.

The Senate President said he realized that the sin tax bill “goes hand in hand” with the proposed P2-trillion budget for 2013.

Read Next
Legarda braves heckling to promote native wear
EDITORS' PICK
The Best Tech Gifts For The 2022 Holidays
EDITORIAL: To a bike-friendly future
Is it safe to talk politics again at family gatherings? ‘The Reconciliation Dinner’ shows us what that’s like
vivo’s coming to town to grant wishes with more holiday promos
Pagasa: Warm, sunny Sunday in most parts of PH
House energy committee chair Arroyo bats for cheap electricity
MOST READ
LOOK: Vhong Navarro transferred to BJMP detention facility in Taguig
The Elephant Man in the Senate
Posh village as ‘shabu’ haven
LOOK: Zanjoe Marudo bonds with Ria Atayde, her family
Don't miss out on the latest news and information.