Use my version of sin tax bill, Santiago urges peers 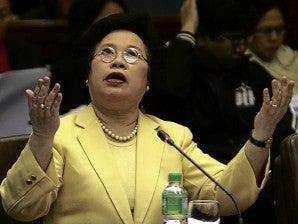 Instead of sending the sin tax bill back to the committee level, the Senate ways and means panel can circulate the original version proposed by Sen. Miriam Defensor-Santiago and get its 15 members to agree to use it as the basis for plenary debates.

This after Sen. Ralph Recto resigned as committee chairman and moved to withdraw his report that was widely criticized as favoring tobacco companies.

Santiago on Sunday proposed that Sen. Franklin Drilon, acting Senate ways and means chair, could simply circulate her version of the sin tax bill among the 15 members for their signature, get a majority to agree and replace Recto’s committee report that apparently needs a major overhaul.

Malacañang wants to raise P60 billion in fresh revenue—from additional taxes on tobacco and alcohol products. Recto, however, presented a committee report that would raise only between P15 billion and P20 billion in additional sin taxes.

Santiago said her suggestion would speed things up in the upper chamber since there would be no need to go through a slew of committee hearings before it could be presented on the floor.

As it is, the Recto report remains in plenary since the ways and means committee has not yet formally withdrawn it from the floor despite Recto’s motion.

Drilon told the Inquirer last week that the 15 panel members must meet and decide whether to let the Recto report stay in plenary or to recommit it to the committee.

Santiago, however, said that Drilon had told her that he preferred her version of the sin tax bill.

“I recall he approached me earlier knowing I was the author. (Drilon) said he asked Senator Recto to use my bill as the basis for his committee report and just alter (palitan) some provisions so that a compromise could be achieved and we could start the debates.  But (Recto) disagreed (ayaw nya),” Santiago said in a radio interview.

Santiago said she understood Drilon’s statement to mean he “favors” her bill since it reflects “exactly what President Aquino wants.”

The Department of Finance wants the sin tax bill to raise P60 billion to fund the government’s universal healthcare program, especially the care of public hospital patients with lung diseases.

Santiago said that under her bill, 85 percent of the P60 billion would be used for the government health program while the remaining 15 percent for safety nets that would ensure that tobacco farmers can shift to more lucrative crops like vegetables that have a bigger market than tobacco.

She said medical practitioners and organizations had openly thrown their support behind her measure, noting that 75,000 lung patients died yearly because of deadly disease brought about by tobacco use.

“These doctors are actually the ones who should be credited and not me. They support deterrents to tobacco consumption.  They would not look for means to make things worse for their patients,” Santiago said.

At the same time, Santiago suggested the creation of an online campaign where the senators, particularly those seeking reelection, should be made to categorically declare their positions on the sin tax bill.

She said this information would be appreciated by netizens and help them decide which candidates to vote for in next year’s elections.