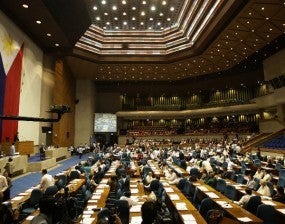 Lawmakers attend a session at the House of Representatives Monday, opting to end debate on the controversial Reproductive Health Bill. AP FILE PHOTO

MANILA, Philippines—Some of the most rabid supporters of the reproductive health (RH) bill are said to be sheering off a compromise version being proposed in the House of Representatives.

Agham Rep. Angelo Palmones said he and about half of the nearly 100 original coauthors have lost their “passion” for pushing House Bill No. 4244, or the RH bill.

“I have to be honest. Many are no longer attending briefings. What’s the sense of legislating something when it no longer contains what you originally believe in?” he said.

He noted that many of the bill’s proponents no longer attended the “informal briefings” on the compromise version. There were at least three such meetings last week, he said.

Palmones said he was dismayed that the proposed substitute measure was focused on “responsible parenthood” and away from the original intent of the bill.

Sotto has been fighting the RH bill in the Senate, arguing, among other things, that many of the provisions were already contained in existing laws such as the Magna Carta of Women.

In the budget bill for 2013 that was approved in the House, the Department of Health got a P537-million allocation for the purchase and distribution of contraceptives.

A key amendment contained in the RH compromise bill in the House is the state guarantee of “public”—not “universal”—access to “relevant information and education on medically safe, legal, ethical, affordable, effective and quality reproductive health care services, methods, devices.”

The provision also includes supplies “which do not prevent the implantation of a fertilized ovum as determined by the Food and Drug Administration.”

It is seen as a guarantee that no known abortifacients would be included in the government’s purchase of contraceptives for public distribution.

The proposed amendments have set off spirited discussions in social media. In a Facebook page promoting the RH bill, for example, one user blasted the new version. “You can call me anti-RH bill, I will fight any pseudo RH bill passed not to meet the needs of the people but the wishes and whims of the church,” he wrote.

Another user on the other side of the debate welcomed the former’s position, saying: “We will fight this RH bill together!”

Albay Rep. Edcel Lagman, a principal author of the RH bill, earlier insisted that the amendments “do not dilute or destroy the essence of the original bill.”

Told about the assurances from Lagman, Palmones said the Albay representative wanted an RH bill passed because it would be a “feather in his cap.”

But time might be running out for the measure, he said.

“We’re just giving false hopes to the advocates and I don’t think there will be time to pass it,” he said.