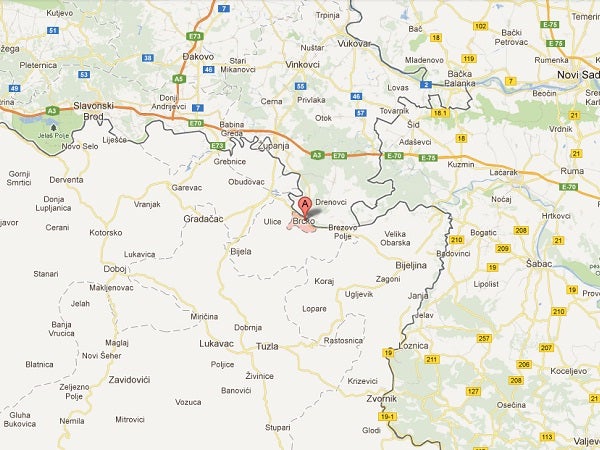 SARAJEVO – A Bosnian scrap metal dealer raised his sights from stealing and illegally selling metal drain covers and made off with an entire iron bridge, local police in the northeast of the country said Friday.

“A few hours after we were informed about this most unusual crime we detained a suspect, a man of 29, at his home,” Mile Jurosevic of the police in Brcko in northeast Bosnia said.

“We also found in the courtyard in front of his house the metal structure of the bridge, cut in two to make it easier to transport.”

He said that the bridge, which is 12 metres (40 feet) long and weighs several tonnes, was stolen on Wednesday night at Dizdarusa, a suburb of Brcko.

“The metal structure was unscrewed from its base and dragged several metres (yards) to the nearest road” before being loaded on to a truck, he said.

The bridge was in a farming area through which a small river runs and was regularly used by several families to reach their fields, Zejneba Pasalic, a local woman, told the press.

She had been astonished to discover the disappearance of the bridge and alerted the police.

The bridge was built in the 1980s by local people using scrap railway tracks, she said.

Bosnia is one of Europe’s poorest countries with an unemployment rate of 40 percent. Hundreds of people, including entire families, collect scrap metal which can be sold locally for 20 euro cents (26 US ) a kilo.

The vanishing drain covers, stolen and sold on the local black market, pose a real problem for the local authorities.

Read Next
‘Dirty Harry’ shoots back at ‘Asiong’
EDITORS' PICK
294 areas in NCR under granular lockdown — PNP
Pharmally’s Mago no longer in her condo unit — Gordon
Gordon to Pharmally’s Mago: Show up or be a fugitive
Huawei’s relentless mission to bring ultimate health and wellness tracking for your fitness goals
Smart reaffirms 5G leadership as PH’s most reliable 5G mobile operator
4 essentials for overcoming data protection challenges in the New Normal
MOST READ
Pharmally’s Mago no longer in her condo unit — Gordon
Senators secure Pharmally exec offering to turn witness
Guimbal, Iloilo Mayor Oscar Garin passes away
Bong Go says he is not seeking presidency in 2022
Don't miss out on the latest news and information.