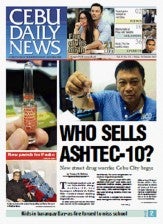 The blackmarket sale of an injectable drug, Ashtec-10, has barangay officials in Cebu City worried about dealing with another source of drug dependence.

It costs P250 per vial on the street and claims to be Nalbuphine Hydrochloride, the same composition as Nubain, a regulated painkiller.

“Bag-ong gamit sa mga adik-adik. Daghang baligya,” said Cebu City Councilor Michael Ralota, president of the Association of Barangay Councils (ABC). (This is something new being used by drug addicts. Many are selling it.)

He showed a sample vial to Cebu Daily News given to him by Kamagayan barangay captain Celestino Avila, where the drug is reportedly rampant.

Ralota said he learned about Ashtec 10 when Avila brought it up during a meeting last Oct. 13 of seven barangays under Station 1 Task Force team of barangay Parian.

A Cebu City ordinance already regulates the sale of Nalbuphine Hydrochloride or Nubain, which was listed as a “dangerous drug” in 2011 by the Dangerous Drugs Board (DDB) after over 17 years of lobbying for its reclassification based on trends of drug abuse in major cities in the country.

But what is Ashtec 10 exactly?

Based on its packaging, it’s made in Lahore, Pakistan. However, the brand name and the company Elice Pharma Ltd. do not appear to be a duly registered brand or pharmaceutical firm based on an Internet search.

It could be a copycat version of Nubain, which is used in hospitals as a licensed product of Boots Pharmaceuticals for pain management. Only a laboratory test would confirm its true chemical composition.

“Ashtec is a downer,” said Elfie Gromia, head of the Compliance Section of the Philippine Drug Enforcement Agency in Central Visayas (PDEA-7).

He said that based on accounts of Kamagayan drug users, taking it makes one sleepy and forget problems.

Gromia said Ashtec 10 became in demand as it cost less than shabu which currently sells for P5,000 to P6,000 per gram on the street.

When Ashtec-10 became in demand by “shooters” or drug users who inject, the cost went up to P500 per vial, said PDEA.

PDEA 7 officials said they were aware of the sale of Ashtec 10 in the blackmarket. Several boxes containing 5 ampules each were confiscated by PDEA in Talisay City in 2011 from a certain woman, Leonarda Lim, who was charged.

PDEA Regional Director Jigger Montallana said there was a local supplier in Manila, and the drug was found to be manufactured in Pakistan and India.

He said PDEA already detected Ashtec 10 since 2011 in barangay Kamagayan in Cebu City and that they have been closely monitoring the situation.

Nalbuphine Hydrochloride was included in the list of dangerous drugs in DDB Board Regulation No. 1 signed in Dec. 16, 2010 which took effect in 2011.

It joined the list of substances like shabu, marijuana, heroin and cocaine covered by Republic Act 9165 or the Comprehensive Dangerous Drugs Act of 2002, which makes possession and sale punishable under the law.

Known by its more commonly known brand name, Nubain, the drug can only be prescribed by a medical practitioner with a valid S-2 license using a special “yellow pad” prescription form issued by the Deparment of Health. Each prescription is limited to 40 mg.

Pharmacies that can only sell dangerous drugs were issued an S-3 license by the PDEA.

DDB studies showed that Nalbuphine Hydrochloride can lead to drug dependence and was the 5th most commonly encountered drug of abuse by victims seeking treatment and rehabilitation in centers in 2009 admission reports.

“We have a strict control in PDEA that Nalbuphine is a dangerous drug; so, the patient should be armed with valid prescripition issued by a licensed physician,” said Licen.

City Councilor Ralota said he plans to sponsor an ordinance to regulate the sale of Ashtec 10.

However, Licen said there’s no need for this since Cebu City already has an existing ordinance: “It only needs to be amended.”

Ceby City Ordinance 1427 already bans the sale of Nubain without the prescription of licensed doctors.

Drug users who are arrested for the first time will made made to undergo a rehabilitation program. Second time offenders face six years imprisonment with more grave penalties in repeat offenses.