Hundreds turn up in rally to back Ako Bicol 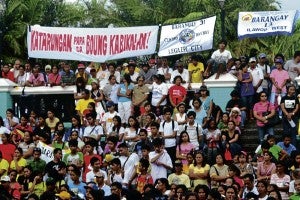 HUNDREDS of supporters of Ako Bicol gather at the Peñaranda Park in Legazpi City to show their support to the party-list group. JUAN ESCANDOR JR./INQUIRER SOUTHERN LUZON

LEGAZPI CITY—Hundreds of supporters of the party-list group Ako Bicol (AKB) trooped to the streets here on Thursday to denounce the decision of the Commission on Election (Comelec) to disqualify AKB in next year’s elections.

More than 2,000 villagers, representing many of Bicol’s poorest, walked the three-kilometer stretch of Rizal Street from Quezon Avenue in the city’s downtown to Peñaranda Park in Albay District.

The protesters, wearing yellow and black armbands, carried streamers with slogans supporting the AKB party-list as they paraded on Rizal Street.

AKB Rep. Rodel Batocabe said the protesters came from the six Bicol provinces and ended their activity with a prayer rally for Comelec to reconsider its decision and recognize AKB as a legitimate party-list group.

AKB garnered 1.5 million votes in the 2010 elections, giving it three seats in the House of Representatives.

Batocabe said the protesters are from different sectors in the region like youth, farmers, fishermen, women and tribal communities who had received help and had been represented by AKB in the House.

Batocabe and other AKB Representatives Alfredo Garbin and Christopher Co started the day with the distribution of CFL (compact fluorescent lights) to 1,500 poor families in Tabaco City.

In a statement, Sen. Koko Pimentel said the Senate should investigate the Comelec decision to delist AKB since it would mean massive disenfranchisement of the group’s constituents.

Albay Gov. Joey Salceda also said he was “dismayed” by the Comelec decision.

Garbin said groups seeking AKB’s ouster are jealous of the massive support for the group.

“The Bicol region is the fourth poorest in terms of the number of poor families,” said Garbin.

“The geographic persistence of poverty in the region can only be structural in character and could only be resolved by structural remedies, one of which is greater representation in Congress,” Salceda earlier said.