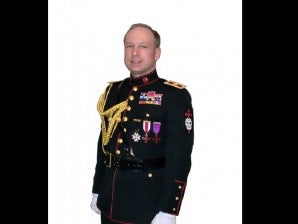 This image shows Anders Behring Breivik from a manifesto attributed to him that was discovered Saturday, July 23. The Norwegian news agency NTB said Breivik wrote a 1,500-page manifesto before the attack in which he attacked multiculturalism and Muslim immigration. (AP Photo/via Scanpix)

DENVER — Parts of the manifesto written by the suspect in Norway’s terrorist attacks were taken almost word for word from the writings of “Unabomber” Ted Kaczynski.

The passages copied by Anders Behring Breivik appear in the first few pages of Kaczynski’s manifesto. Breivik changed a Kaczynski screed on leftism and what he considered to be leftists’ “feelings of inferiority” — mainly by substituting the words “multiculturalism” or “cultural Marxism” for “leftism.”

For instance, Kaczynski wrote: “One of the most widespread manifestations of the craziness of our world is leftism, so a discussion of the psychology of leftism can serve as an introduction to the discussion of the problems of modern society in general.”

Breivik did not cite Kaczynski, though he did so for many other people whose writings he used in his 1,500-page manifesto.

Breivik is accused of killing at least 93 people Friday by setting off an explosion in downtown Oslo and then gunning down young campers on a nearby island. Kaczynski is serving a life sentence in federal prison in Colorado for mail bombs that killed three people and injured 23 others across the U.S. from the 1970s to the 1990s.

Former FBI Agent Terry Turchie, who supervised the federal task force to capture the Unabomber, said Sunday that he saw similarities between the two men.

“They seem to have this anger, the loner aspect, this desire to look back at the way things were and think of themselves as self-reliant,” said Turchie, who wrote “Hunting the American Terrorist: The FBI’s War on Homegrown Terror” in 2007.

“The real problem is these loners are much more difficult to find and prevent from killing people than other kinds of terrorists,” he said.