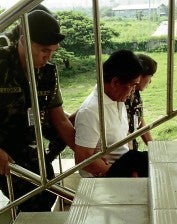 EX-COL. Eduardo ‘‘Red’’ Kapunan (in white shirt) is immediately whisked out of the Antipolo City courthouse by military escorts following his arraignment on Wednesday. PHOTOS BY KRISTINE FELISSE MANGUNAY

Lawyer Edre Olalia has dreamed of the scene for 26 years: “To see him, somebody so powerful and untouchable for a long time, now wearing handcuffs. Finally, this is happening.”

The human rights lawyer was referring to his first courtroom encounter with former Air Force Lt. Col. Eduardo “Red” Kapunan, one of the 13 military men accused of killing his cousin, labor leader Rolando Olalia, and driver Leonor Alay-Ay shortly after the fall of the Marcos dictatorship in 1986.

Kapunan, who surrendered to the Army in Capiz province on Oct. 6 and was since placed under military custody in Fort Bonifacio, pleaded not guilty to both murders at his arraignment before Judge Ma. Consejo Gengos-Ignalaga of Antipolo City Regional Trial Court Branch 98.

Accompanied by lawyer Alex Popones of the Office of the Judge Advocate General of the Armed Forces of the Philippines, Kapunan was immediately whisked away by the military police following the proceedings. Also seen in the courtroom was his wife Elsa.

Some 20 militant activists staged a rally in front of the Antipolo RTC building during the proceedings, condemning what they called the delayed administration of justice in the Olalia-Alay-Ay murders.

Kapunan was a prominent officer of the Reform the Armed Forces Movement (RAM) formed in the final years of the Ferdinand Marcos regime and one of the leaders of an aborted coup that led to the 1986 Edsa People Power Revolution.

He was ordered arrested only in February along with 13 others for the killing of then Kilusang Mayo Uno chair “Ka Lando” Olalia and his driver Alay-Ay. The two men were abducted, tortured and killed, with their bodies eventually found in Antipolo on Nov. 13, 1986.

Following the arraignment on Wednesday, Edre Olalia said he was no longer surprised by Kapunan’s pleading. “To start off, they (RAM members) were invoking amnesty.”

Edre Olalia, one of the private prosecutors in the case, has filed a motion seeking Kapunan’s transfer from a military facility to a civilian jail, citing the treatment being given to his coaccused, Sgt. Desiderio Perez, who is under the custody of the Rizal provincial police.

Public prosecutor Keit Ronatay also said Kapunan should be transferred to the National Bureau of Investigation, for example.

The ex-colonel’s counsel and sister-in-law Lorna Kapunan, however, has filed motion maintaining that his client should remain in military custody for health and security reasons.

The judge gave Edre Olalia and Romatay until Thursday to submit their comment on Kapunan’s motion. The court will also hold bail hearings on Oct. 24, Oct. 30, Nov. 20 and Nov. 27.

In an interview with the Inquirer, Elsa Kapunan said her husband surrendered last week “to clear his name” and insisted that he had nothing to do with the Olalia-Alay-Ay murders.

Asked why her husband surrendered only this month long after the arrest warrant was issued in February, Elsa said Kapunan was too busy attending to their business venture in Iloilo province.