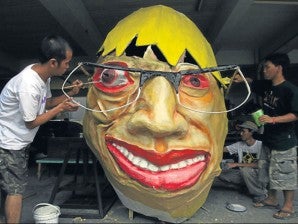 THE USUAL EFFIGY Members of Bagong Alyansang Makabayan prepare a giant effigy of President Aquino which the militant group will unveil in their Sona rally on Monday. RAFFY LERMA

He’ll be hailed inside the halls of the House of Representatives but heckled on the streets, this time as a fragile “Humpty Dumpty” or a “rotten egg” perched on an American jeep.

Militants will parade a 14-foot “PeNoy” effigy of President Benigno Aquino III down Commonwealth Avenue in Quezon City on Monday (today) while he delivers his second State of the Nation address (Sona) at the Batasang Pambansa complex.

The effigy will be part of an 8,000-strong crowd marching in protest of the administration’s first year of “unfulfilled promises.”

Unlike last year, when militants spared Mr. Aquino’s effigy from the ritual burning, members of the umbrella group, Bagong Alyansang Makabayan (Bayan), will set his caricature on fire.

“We feel that Noynoy (President Aquino) cannot make good on his word of bringing change. Instead, life is getting harder under his administration,” said Crisanto de Leon, chair of UgatLahi Artist Collective.

Militants skipped the ritual effigy burning in July 2010 as they felt the new President deserved a chance to prove that he could deliver.

Artists from UgatLahi, Bayan and students from the University of the Philippines-Diliman worked on the “PeNoy” effigy as a parody of the President’s nickname (P-Noy).

The egg is perched on a US Hummer jeep because the President is reliant on the United States and lacks “an independent foreign policy,” militants said.

“The egg appears to break or crack to let out the issues that hounded the administration in the past year, such as rampant oil price hikes, public-private partnerships, unemployment and demolition of communities,” the militants said.

Workers rejected the “achievements” that the President was expected to report today to Congress and the people during his second Sona.

Partido ng Manggagawa said the President’s achievements in the anticorruption drive and good governance were not enough.

“Despite the absence of wang-wang (vehicle sirens), despite the resignation of Ombudsman Merceditas Gutierrez and despite the initiative to prosecute former President Gloria Macapagal-Arroyo for plunder, it is undeniable that the number of poor and hungry Filipinos has remained the same if not worsened,” Gerry Rivera, Partido ng Manggagawa vice president, said in a statement.

Rivera said the President should not forget that his “social contract” with the people involved implementing social reforms to promote economic progress and equality in Philippine society.

“Workers believe that poverty will not be solved by good governance alone. Poverty can only be eradicated by reforms in the economic and social arena that attacks the iniquitous distribution of wealth in the country,” he said.

In a separate statement, KMU vice chair Lito Ustarez said his group was giving Mr. Aquino a failing grade of 5.

“After more than a year, it is more than clear: The change and daang matuwid (righteous path) which Mr. Aquino promised are not for the hungry workers and people, but for the oil cartel, big foreign and local capitalists and the Kamag-anak Inc.,” Ustarez said.

He said it was not true that it was still too early to judge the Aquino administration. “His outright rejection of the demands of the Filipino workers and people for immediate relief from hunger and suffering is already telling,” he said.

Ustarez and Rivera said that after one year in office, the Aquino administration had no new program to generate jobs, no new mechanism to increase workers wages, no change in the no-union policy in economic zones, no action against job contractualization and dangerous work sites, and no end to fuel price increases.

Ustarez said the administration was making public services even more inaccessible to the people. “It hiked toll fees last January and is bent on hiking fares in the MRT and LRT. It continued to cut budgets for education and other social services,” he said.