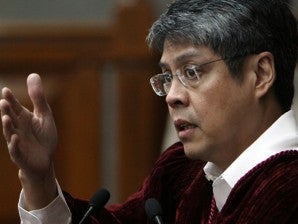 Bureau of Fisheries and Aquatic Resources director Perez Asis made the revelation at a budget hearing in the Senate on Tuesday.

Senate agriculture committee chair Francis Pangilinan asked the Philippine National Police to “address the unacceptable situation,” adding that the wanton use of dynamite to gather fish would have adverse effects on the sustainability of these fishing grounds.

“Obviously it’s a lucrative industry and there are people on the ground who are involved.  It would be impossible for personnel and the local officials not to be aware about this,” he said.

As it is, Senate finance chair Franklin Drilon said the country’s fisheries sector has already been contracting for the last 10 quarters.

In an impromptu news conference, Drilon said the sector registered declines of 4 percent in 2010 and 2.8 percent in 2011. For the first half of the year, the fisheries sector posted a decline of 3.3 percent.

“This is alarming because 18 percent of the country’s agricultural output is contributed by the fisheries sector. We call the attention of Agriculture Secretary Proceso Alcala to this sector,” Drilon said.

The senator said he expected the fisheries sector’s contraction to continue for the rest of the year.

If the authorities addressed the situation, a turnaround could occur in 2014, he added.

Pangilinan noted that the BFAR allocation for 2012 is P3 billion.  The bureau is asking for an additional P1.6 billion next year.

Global environment experts have already raised the red flag over dwindling aquatic resources throughout the world.

Not only are fish harvested from the wild becoming smaller.  Apart from overfishing, their reduced number is also blamed on other factors like climate change.