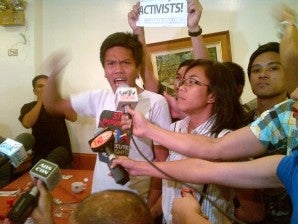 In the middle of the press conference where members of the Akbayan coalition were explaining why their party-list should not be disqualified from the 2013 polls, youth members of the Anakbayan organization shouted “disqualify Akbayan, fake partylist.”

The youth members of the Anakbayan questioned why Akbayan Representative Walden Bello, back in 2007, was protesting that pro-admin partylists should be disqualified when they were now “tuta ng administrasyon ni Noynoy (lapdogs of the Aquino administration).”

The protesters carried photos of Bello back in 2007.

As tensions rose, members of the Akbayan in turn shouted “KSP,” “utak pulbura,” and branded what they described as the extreme leftist groups as “drifting into irrelevance” who did not like the reformist stance of Akbayan.

Left-wing Anakbayan party-list had been pushing for the Commission on Elections to disqualify Akbayan, saying Akbayan was not marginalized since it was favored by President Benigno Aquino III. It said that Akbayan’s members held key positions in the present administration.

Bello, who engaged in a word-war with the protesters, said that they did not respect groups’ rights to freedom of assembly.