President to focus on transformation 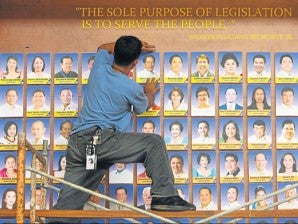 RUSH JOB A worker applies the finishing touches on the photo gallery of the House of Representatives where President Aquino will address the nation Monday. MARIANNE BERMUDEZ

“The President will talk about transforming society, his vision and aspirations for the country, and what he wants the country to be.”

This is the thrust of President Aquino’s second State of the Nation Address (Sona) on Monday, according to Communications Secretary Ricky Carandang, that House and Senate leaders expect would set the legislative agenda for the next five years of his administration.

For the transformation to happen, senators have put together a “wish list,” topped by a call on Mr. Aquino to certify as urgent at the opening of the 15th Congress the passage of the long-pending Freedom of Information Act (FOI) and the proposed Whistle-blowers Act.

Leftist and civil society groups have announced plans to mobilize an 8,000-strong march on Congress to protest what they said were Mr. Aquino’s “unfulfilled promises.” For the first time, the protesters planned to burn an effigy of the President.

Authorities said 7,000 riot police had been assembled to stop the protesters from getting close to the Batasang Pambansa complex on an expected rainy day. School classes have been suspended in Quezon City on Monday.

Sen. Gregorio Honasan on Sunday said the FOI bill, which would allow public access to government documents except those concerning national security, was the key to ensuring transparency and eliminating corruption.

“The essence of transparency is guided by the core value that an informed citizenry is an empowered citizenry,” Honasan said in an interview.

A companion legislation would be a program to protect whistle-blowers, Honasan said. “What protection can we give them? They come out to testify on wrongdoing; some have died and continue to be victimized.”

Senate Minority Leader Alan Peter Cayetano also supported the immediate passage of the FOI bill in the wake of revelations in recent hearings on the alleged misuse of billions of funds of the Philippine Charity Sweepstakes Office (PCSO).

“If the FOI (bill) is passed then the PCSO would have to put all these on their website or release documents upon request, which would be more transparent, making every citizen capable of investigating and fighting for good governance,” Cayetano said.

Malacañang’s openness to the measure is an “encouraging sign,” the senators said.

To give more teeth to the justice system to prosecute grafters, among others, Sen. Francis Pangilinan batted for the creation of more courts.

Pangilinan said there should be “additional funds for the justice system, and additional compensation for judges and justices.”

“We need a direction, a vision, and we need to have a clear national order of priorities,” Honasan said.

“After the Sona, I hope that the second Ledac (Legislative-Executive Development Advisory Council) will take place as a follow through to whatever will be discussed in the Sona,” he added.

Carandang brushed aside suggestions that Mr. Aquino’s Sona would center on yet another blast against former President Gloria Macapagal-Arroyo. “It’s much more than that,” Carandang told the Inquirer on Sunday.

The Palace at the weekend said the “overarching themes” in Mr. Aquino’s Sona would be his administration’s accomplishments in its anticorruption campaign and on what he intended to do in the coming year.

The administration has started to file tax evasion cases against Arroyo’s allies and is now looking into possible evidence on allegations the former President, now a Pampanga representative, manipulated the 2004 presidential and 2007 senatorial elections.

In the run-up to Sona, a series of whistle-blowers have emerged offering to testify against Arroyo on corruption and electoral sabotage.

No scoops this time

The content of this year’s Sona has been a well-kept “secret,” the Palace said. ABS-CBN, Carandang’s previous employer, got a scoop on the Sona last year, prompting protests from rival TV networks and Palace reporters.

Carandang said the President’s address was a “work in progress” and that the Palace media office did not want to preempt him. But he let out that it would be a “positive” speech.

He said the President was “hands on” in the conceptualization and in the writing of the Sona with the collaboration of his eight-member team of speech writers. It had undergone eight revisions, he said, and would be longer than his 30-minute address last year.

Presidential deputy spokesperson Abigail Valte said the Palace was “taking note” of the 4.78 performance rating on a scale of one to 10—10 being highest—that Mr. Aquino got from experts belonging to the Movement for Good Governance, as well as other assessments of the President’s one year in office.

“The President was not elected for one year alone. He has a six-year term and as such, we all know that we still have to do a lot of work because we do have a lot of problems to face,” Valte said.

And in the face of China’s increasing incursions into the Spratly Islands at the West Philippine Sea, senators also placed that among the priority issues that Mr. Aquino should attend to.

“If we are serious about sustainable development, we need a land use policy. That should be No. 1 because that will allow a serious inventory of what we have in our land and water resources,” Honasan said.

“Look at Spratlys. Do we just sit on it and get the title on it? Or use it?” he said of the potentially mineral-rich islands also claimed by China, Vietnam, Taiwan, Malaysia and Brunei.

Sen. Pia Cayetano said she hoped that the administration would support the controversial reproductive health bill—a measure that had put the Palace at loggerheads with Catholic bishops—and a bill seeking universal coverage for PhilHealth members “with more conviction and more funds.”

Senate President Juan Ponce Enrile said he hoped the President would give priority to economic measures that would attract investments. “Investments are the key to creating jobs,” he said.

Senate President Pro Tempore Jinggoy Estrada said labor should not be overlooked, particularly household employees who are among the most prone to abuse.

Estrada noted that the Kasambahay bill that was meant to provide higher wages and more benefits to maids, nannies, drivers and the like was “ignored in the 13th and 14th Congresses.”

Senate Majority Leader Vicente Sotto III said the President should spell out specific changes in government protocol on the war against drugs.

“Amendments to the Dangerous Drugs Act are in order. So is the increase in the salaries of those involved in drug operations of the (Philippine Drug Enforcement Agency),” Sotto said.

Sen. Loren Legarda said Malacañang should “present to us a comprehensive program that will address the ill effects of climate change on health, hunger and malnutrition, agriculture and fisheries, natural resources and energy.”

Sen. Edgardo Angara said the Sona should include “an organized national medical plan that would provide good opportunities for medical professionals,” pointing out a “gross maldistribution of medical personnel in the country.”

Sen. Francis Escudero said he hoped that Mr. Aquino would support his plan to create a fact-finding committee to investigate poll fraud in the 2004 presidential elections.

“I hope he mentions it,” said Escudero, spokesperson for the late Fernando Poe Jr., who lost the 2004 presidential election to Arroyo.