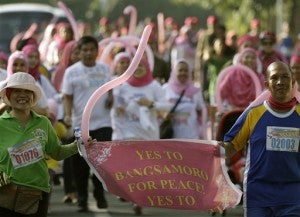 Filipino Muslims and members of the Philippine military join a fun run in support of a preliminary peace agreement between the government and the nation’s largest Muslim rebel group in suburban Quezon city, north of Manila, Philippines on Sunday Oct. 14, 2012. Philippine officials hope a preliminary peace deal the government recently clinched with the Moro Islamic Liberation Front will eventually turn the 11,000-strong insurgent group into a formidable force against the remnants of the Abu Sayyaf and other radicals, including several Indonesian and Malaysian militants believed to be taking cover in the southern Mindanao region. AP PHOTO

MANILA, Philippines – This is what “fun” in fun run should be all about.

On the eve of the signing of a landmark peace agreement between the Philippine government and the Moro Islamic on Sunday joined “happy” Muslim hijabis in a run aimed at fostering religious understanding.

“We are happy and grateful to the AFP (Armed Forces of the Philippines) and all our partners for working with us in promoting peace and religious understanding,” said Amirah Gutoc, chair of the YMPN’s committee on women.

“We believe that the time for peace is now,” she told the Philippine Daily Inquirer.

Gutoc stressed the importance of respecting religious beliefs in advancing peace efforts and ending the secessionist rebellion in Mindanao.

“Without religious understanding, we cannot have peace. It’s a way of achieving peace especially for a minority sector like us which belong in a Christian-dominated country,” she said.

“Although we have our own distinct Bangsamoro identity, we are still part of the Filipino nation.”

During the event, Muslim women wore pink hijab or head scarf symbolizing their campaign to promote respect for the traditional Muslim outer garment and their religious beliefs.

Citing security reasons, two private schools in Zamboanga City banned the use of the hijab and niqab- a veil that covers the entire head except the eyes- among its students last August.

To show their support, other participants in the fun run wore pink headbands as they ran from the People Power Monument at the corner of Edsa and White Plains Avenue in Quezon City to the AFP grandstand in nearby Camp Aguinaldo.

“Today (Sunday), with our ‘Hijab Run for Peace,’ we made history by supporting both the wearing of hijab as part of our Islamic faith and the signing of the framework agreement to show that we are continuously committed to peace and empowerment of our brothers and sisters in the south,” Bai Rohaniza Sumndad Usman of YMPN said at the closing ceremony held at Camp Aguinaldo.

“We have fought for peace from one generation to another. We moved forward and became proactive to create positive developments towards just and sustainable peace,” she added.

“More than any other group, it is the (AFP) which is very interested in winning this peace because it is our soldiers who are being sent to the forefront. We share the suffering, misery and misfortunes of (the armed) conflict,” Rodriguez said in his speech.

“This is a very good opportunity… to send out a message that we should understand… that we, as a nation of diverse people, get our unity and cooperation from our own diversity,” he said.

For his part, AFP chief of staff General Jessie Dellosa said the gathering “demonstrated the favorable response and support of the Muslim community to the signing of the framework agreement… as well as for more understanding and tolerance among every religion in the country.”