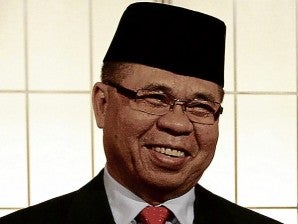 Even at a young age, Ahud (aka Murad) Ebrahim, who was born on May 2, 1948, showed the resolute and single-minded qualities of the born fighter.

Orphaned at 13 when his father and mother died within a year of each other, Ebrahim persisted in the study of the Koran at the family-operated madrasah (Muslim school) in Barangay Katidtuan between the towns of Libungan and Sultan Kudarat in the old province of Cotabato.

While pursuing his Koranic studies at the madrasah, he went to a regular high school with the help of some well-to-do relatives, the prominent Pesigan clan among them.

After finishing high school, the young man who dreamed of becoming an engineer enrolled at the Catholic-run Notre Dame University in Cotabato.

While still in college, he worked as a laborer at Lamsan Trading starch factory in Salimbao, Sultan Kudarat. An accident at Lamsan resulted in the mangling of his right hand. He lost about an inch of his middle and fourth fingers.

According to government intelligence sources, Ebrahim became involved in the Muslim —which the proponents call the Moro—independence movement while still a student at Notre Dame when he met the charismatic Nur Misuari and the Egypt-trained Islamic scholar Hashim Salamat, the leaders of the nascent Moro National Liberation Front (MNLF).

At 22, Ebrahim quit college to go underground, one semester short of getting his civil engineering degree.

He later found himself on a boat “along with dozens of other Moro youths” bound for Sabah in East Malaysia to train and become pioneers of the MNLF.

When he returned to Mindanao after only a few weeks of training, Ebrahim became known as “Murad” and was designated MNLF field commander of Zone 1.

He led rebel forces in engaging soldiers and the dreaded Ilaga/Civilian Home Defense Force in fire fights in various areas of what are now the provinces of Maguindanao and North Cotabato.

By 1980, he had transformed into one of the MNLF’s most “influential and notorious” commanders linked to countless deaths in battle.

That same year, he was named commander of the MNLF’s Kutawato Revolutionary Committee, replacing Ronnie Malagiok, who decided to surrender to the Marcos government.

Although Ebrahim will not confirm it, government intelligence sources believe he joined anti-Soviet forces fighting alongside future al-Qaida leader Osama bin Laden in Afghanistan in the 1980s.

In the late 1970s, Ebrahim married his secretary, Lupia. The couple have two sons. Unlike other Muslim men, he did not take another wife.

For all his warrior reputation, Ebrahim hardly gets angry, according to Kabalu.

“He deals with anybody and his ways are not drastic. Even if he is already angry, you will never see it on his face. He always smiles. He is very diplomatic and will not directly say ‘no,’ even if he doesn’t like the idea being broached to him,” he said.