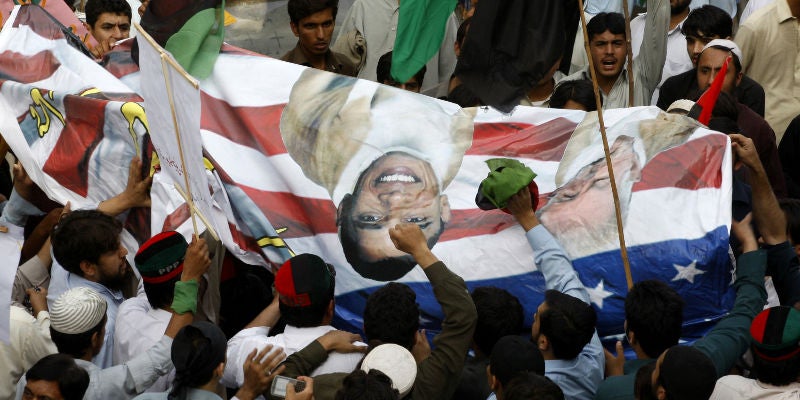 Pakistani protesters hold a banner depicting US President Barack Obama and pastor Terry Jones during a rally in Peshawar, Pakistan as a part of widespread anger across the Muslim world about a film ridiculing Islam’s Prophet Muhammad, on September 20. AP

TORONTO—Canada has denied entry to US pastor Terry Jones, whose congregation held a Quran burning ceremony in March 2011 that triggered deadly protests in Afghanistan, a spokeswoman said.

Stephanie Sapp said fellow pastor and husband Wayne Sapp, along with Jones, were turned back at the Michigan-Ontario border Thursday after being detained for several hours. Jones, who leads Florida’s tiny Dove World Outreach Center, and Wayne Sapp, were scheduled to attend Freedom Showdown, an inter-faith debate Thursday evening outside the Ontario Legislature.

Stephanie Sapp said Jones was denied entry because of a fine he received in Germany almost 20 years ago for using the title “doctor” there. He had received an honorary doctorate in theology from a California university in 1993.

Also, both men had been charged with breaching the peace at a planned rally in Detroit last year.

The spokeswoman told The Associated Press that Jones had paid the fine in Germany at that time and won his appeal to the German government for the right to use the title of “doctor.” She said border officials told Jones the Canadian government requires documentation of the whole case to be brought to a Canadian Consulate in America in order for them to consider allowing Jones into Canada again.

As for the Detroit-related charge, she said that case was overturned in a higher court on appeal.

“We consider this to be a grievous blow to freedom of speech. We hope that this is a lesson for the Canadians and the Americans for us to stand up, unite together, and protect our freedom of speech,” said Jones in a statement.

Canadian border officials said it is not their practice to confirm whether someone has been denied entry into Canada.

In 2010, Jones issued a call to burn Qurans on the ninth anniversary of 9/11, alarming the US military, which feared the move would endanger the lives of American troops fighting Islamist extremists in Afghanistan and Iraq. Although Jones called off the burning at the time, thousands of Afghans encouraged by the Taliban set fire to tires in the streets of the Afghan capital, Kabul.

Jones’ congregation went ahead with a Quran burning in March 2011, triggering protests across Afghanistan after video of the ceremony was posted on the Internet. In the most violent protest, hundreds of protesters stormed a UN compound in Mazar-i-Sharif in northern Afghanistan, killing seven foreigners, including four Nepalese guards.

Jones was slated to participate in a debate Thursday about “Innocence of Muslims,” the anti-Muslim film that has recently sparked violent protests in the Arab world, the most violent of which led to the death of the US ambassador to Libya and three other Americans in Benghazi last month.

Both pastors were questioned repeatedly by border officials about the film and a protest sign that read “Koran Burning Site” and another saying, “Islam is the New Nazism,” were confiscated at the border, said Stephanie Sapp. She said they were asked several times if they were bringing a copy of “Innocence of Muslims” into Canada.

Freedom Showdown organizer Allan Einstoss said the event went ahead as planned, but lamented Jones’ absence from the debates. Interference from border officials, he said, has quashed an opportunity for a meaningful dialog on free speech.

“That’s the government’s choice, that’s what they wanted,” Einstoss said. “We could have had a nice civil evening, but that’s their decision.”

Last month, Germany forbade Jones from entering the country for a screening of “Innocence of Muslims.”